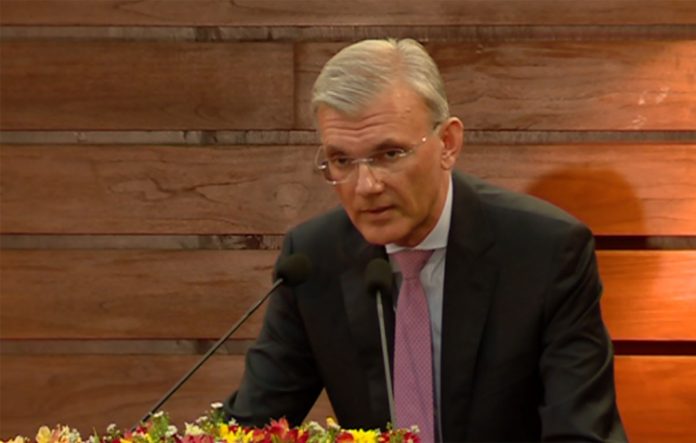 International renowned economist Dr. Razeen Sally says that the incumbent government in Sri Lanka came to power without an economic plan and never developed one and that with elections coming up the country is faced with a choice between “the devil and the deep blue sea”.

The Sri Lankan-born economist, who is a Visiting Associate Professor of the Lee Kuan Yew School of Public Policy at the National University of Singapore, made these comments while delivering the 69th anniversary oration of the Central Bank of Sri Lanka (CBSL) yesterday (11).

He made critical observations on the policies of the former government, the change of government in January 2015 and what has happened since then.

Speaking on the change of government, he said it was not an “economic crisis in the classic sense”, but it was still nevertheless “a once-in-a-generation window of opportunity” for a combination of liberal and economic reform in Sri Lanka. Probably the best since 1977, he said.

He said that Prime Minister Ranil Wickremesinghe certainly thought of it that way and that he and other senior UNP politicians in particular have “intermittently paid lip service” to it since.

Dr. Sally said that on the political front they have seen modest successes and that he suspects that those successes are not major enough not to be reversed in the near future. “I have my worries about that.” He said.

“But I wonder that will hold into the medium term. I have my doubts about that as well,” he stressed.

Dr. Sally also shared a couple of observations on his three years’ experience as, what he termed was “a failed policy advisor” to the government of Sri Lanka.

“I have two main set of observations” Sally said.

“The first is that this government came into power with almost wholly devoid of talent and expertise, quite in contrast to the economic team that was put in place soon after July 1977. LTTE and JVP in combination did a spectacular job at destroying the best of Sri Lanka’s political elite and the new government also came to power without an economic plan and it never developed one. What it eventually came up with was two things, firstly a “Christmas tree wish list” of things that going to happen by 2025 and secondly “rhetorical nonsense” about a Sri Lankan takeoff and Sri Lanka becoming the next Singapore, Which I considered to be an “Orwellian doublespeak”, he said.

“The second major observation I have made was the dire state of the Sri Lankan state or in the academic jargon a serious lack of state capacity and I came to the conclusion quite quickly that even fairly simple reforms were difficult and perhaps in some cases impossible to push through because of the “dysfunction of the Sri Lankan state.”

However, he said that it’s not a Sri Lankan exception. “You find echoes of these in other parts of the world as well,” he said.

Dr. Sally said that with elections not far away there is no sign in the foreseeable future of that first scenario of takeoff.

“Rather I think what Sri Lanka is faced with is a choice between two other scenarios. What I think is on offer in one scenario is continued dysfunction and incompetence where the role of the state still remains too large and the role for markets too restricted.”

“The other scenario, the other choice is for relapse with another decisive shift towards the state and against the market,” he said.

“It is as if Sri Lanka is faced with the choice between Scylla and Charybdis or put another way between the devil and the deep blue sea.”

“My worry is that institutions in Sri Lanka, public institutions in particular remain too fragile. More fragile than I think many in the Colombo chattering class appreciate.” Sally added.