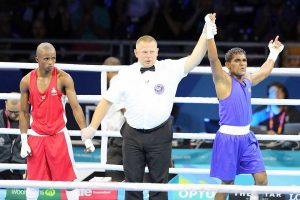 Forty countries will be represented at 5th edition of the Eindhoven Cup Boxing Tournament to be held in Eindhoven, Netherlands from the 3rd to the 7th of this month and Ishan Bandara will represent Sri Lanka.

Ishan Bandara of Sri Lanka will be competing in the 52 kg weight class in this tournament which will be held under the Elite age group in both the men’s and women’s categories. Boxers born in 1982-2003 will also qualify for the tournament.

The EUBC European Men’s Elite Boxing Championships has just finished in Yerevan, Armenia but there is not any stoppage in the tournaments. The Eindhoven Box Cup will be the next important international competition with the participation of a record number of 40 registered nations.

The Eindhoven Box Cup is a new event in the European Boxing map, which was launched only a few years ago but there is huge interest in all of the continents to attend in the event. Such stars as Russia’s Armen Zakaryan, Turkey’s Onur Sipal, England’s Lewis Richardson, and Netherlands’ Peter Mullenberg won gold medals in the 2016 edition in Eindhoven.

The engine and the main organizer of the competition, Mr. Jeremie Besson developed the Eindhoven Box Cup rapidly and his hard work is the result of a new strong international tournament. The last edition of the Eindhoven Box Cup was held in October 2019 and due to the Covid-19 pandemic the event returned to the agenda after two and half years of break.

The finals of the last edition of the Eindhoven Box Cup delivered fantastic and remarkable bouts in the Netherlands. Thailand’s Youth Olympic Games winner Atichai Phoemsap and Netherlands’ No.1 Enrico La Cruz amazed the crowd with their fantastic final which was won by the Southeast Asian teenager in 2019.

The biggest name of the forthcoming Eindhoven Box Cup is Mauritius’ Louis Richarno Colin, the All Africa Games winner, Commonwealth Games bronze medallist and he is a three-time Olympian from Beijing, London and Tokyo. Trinidad & Tobago’s AIBA World Boxing Championships bronze medallist Nigel Paul, and many of the young Irish, English, Italian, German and French future hopefuls are registered to compete in the Netherlands.

Record number of 40 nations have sent their registrations to the upcoming Eindhoven Box Cup, which made the event like a small world championship. Four out of the Confederations, including Europe, Asia, America and Africa are planning to compete in the event.

The weight categories of the event:

The schedule of the event

June 3 – Arrival of the delegations

June 6-7 – Departure of the delegations