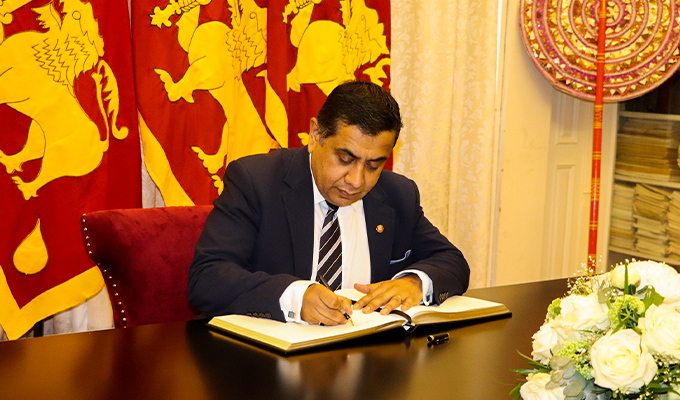 At the same time, the UK announced over £10m of new funding to support long-term stability in Sri Lanka. The UK support will include promoting peacebuilding and dialogue, supporting resettlement and livelihoods for displaced communities and the rule of law.

“I am delighted to announce the launch of a new phase of our Conflict, Stability and Security Fund in Sri Lanka. It will bring more than £10 million of targeted UK programme funding over the next three years. These funds will support peacebuilding and dialogue; resettlement and rehabilitation of displaced communities; and engagement with institutions tasked with protecting the rule of law across the country. I know that many of these issues are close to your hearts, and vital for the future success of Sri Lanka”.

In a programme unfortunately cut short by flight delays, Lord Ahmad met political and religious leaders from across Sri Lanka’s communities. In his meeting with President Maithripala Sirisena they agreed on the importance of reconciliation, and the need for governments to play an active role in encouraging inter-community dialogue and tackling discrimination. Lord Ahmad had a wide-ranging meeting with Minister of Foreign Affairs Tilak Marapana to discuss continued strengthening of the bilateral relationship between UK and Sri Lanka. In his meeting with Leader of the Tamil National Alliance R. Sampanthan, they discussed the shared responsibility of political leaders and communities in ensuring minority concerns and aspirations are heard and addressed.

Freedom of Religion or Belief was a key theme throughout the visit. In his meetings with faith leaders and ministers, Lord Ahmad stressed the importance of religious freedoms and protections for minority groups. He reaffirmed the UK’s commitment to promoting these values, and his firm belief that societies that protect religious freedoms and its minorities are more stable, prosperous and likely to be more resilient against violent extremism.

He met with policymakers and advocates to discuss the role of women in peacebuilding and issues related to conflict-affected women, including gender-based violence, access to justice and stigma. He met the President of Sri Lanka Unites and Commonwealth Points of Light recipient Prashan de Visser to discuss their work on youth and reconciliation. The Deputy High Commissioner attended the opening of the new Sri Lanka Unites centre in Puttalam.

Lord Ahmad visited the St. Anthony’s Church in Kochchikade, one of the targets of the Easter Sunday attacks, to pay his respects.

During the visit, Lord Ahmad also met Sri Lankan business leaders to exchange ideas on opportunities for economic growth and development, and strengthening trade ties between Sri Lanka and UK.