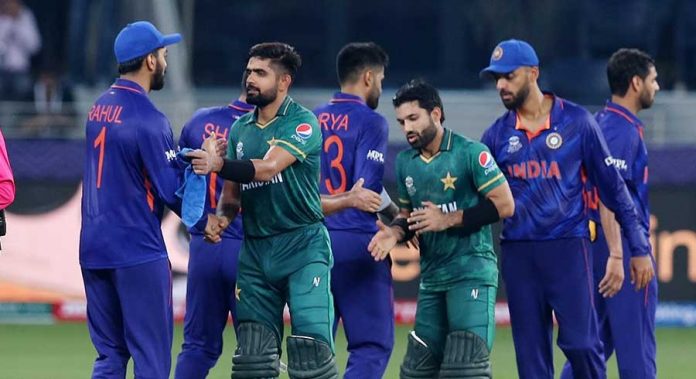 Pakistan rewrote history on Sunday (24) to register their maiden World Cup-win over India in over 29 years as they registered a 10-wicket win over the arch rivals in Match 16 of the T20 World Cup in Dubai.

Pakistan openers Mohammad Rizwan and Babar Azam made light work of the 152-run chase, getting to the target in the 18th over to break the World Cup jinx and register their first-ever 10-wicket win in a T20I match.

Rizwan and Babar laid a solid foundation for the Men in Green, scoring 78 and 68 not out respectively, in the chase to take the game away from the Men in Blue. The duo didn’t give a single chance to the opposition and made full advantage of the dew in the second innings to make history in Dubai.

This was Pakistan’s maiden victory over India in a World Cup match and only their second out of 9 games in the shortest format of international cricket. This was also Pakistan’s first T20I win by 10 wickets over any opposition and the highest opening stand against India in the format. It was also India’s first 10-wicket defeat in the format.

Earlier, Virat Kohli scored his 29th half-century in T20Is before being dismissed for 57 by Shaheen Shah Afridi as India posted 151/7 in their allotted 20 overs. Afridi was on fire as he sent back openers Rohit Sharma and KL Rahul, before Hasan Ali removed Suryakumar Yadav to give Pakistan a great start in the match. Kohli hit five boundaries and a six during his knock. Rishabh Pant also played a good hand as he hit a 30-ball 39, which included two fours and two sixes, before being dismissed by Shadab Khan. Hardik Pandya failed to get going in the death overs but India managed to surpass the psychological 150-run mark.