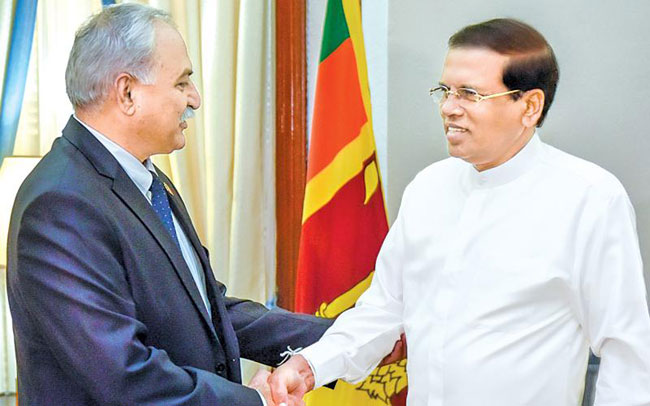 Sri Lankan President Maithripala Sirisena has called for resolution of disputes between Pakistan and India through dialogue for peace and stability in the region.

He was talking to Pakistani High Commissioner to Sri Lanka Major General (R) Dr. Shahid Ahmad Hashmat who called on him in Colombo on Friday (08).

The High Commissioner apprised the President on the security situation in the South Asian region. Dr. Hashmat reiterated emphatically Pakistan’s unrelenting commitment and dedicated resolve for peace, stability and prosperity in the region, the High Commissions said.

The High Commissioner underscored repeated sincere and honest efforts of Imran Khan, the Prime Minister of Pakistan in de-escalating the recent tension across the Line of Control between India and Pakistan.

He emphasized the fact that the entire spectrum of Pakistani leadership advocates and endorses the international community’s support for sustainable dialogue for peaceful resolution of all disputes and conflicts between Islamabad and New Delhi, including the Kashmir issue.

President Maithripala Sirisena stated that Sri Lanka is a close friend of Pakistan and India. Therefore it supports and advocates resolution of conflict between India and Pakistan through bilateral dialogue and negotiations, which is very important for peace and stability in the region.

He further elaborated that the military escalation between Pakistan and India will affect the entire region, especially having a negative impact on economic progress and prosperity, the statement said.

Expressing the paramount importance of peace, the President expressed that as a member of SAARC fraternity, Sri Lanka fully supports peace in the SAARC region and is willing to play an important role in achieving peace. He also underscored the importance of using SAARC forum to promote mutual cooperation among its member states.

The President expressed his confidence that under the astute political stewardship of Imran Khan, Pakistan will not allow the conflict to escalate further and expressed his hope for early resolution of current crisis.

He also appreciated Pakistan’s positive action of releasing the Indian Pilot, expecting that such gestures will help to diffuse tension and would promote peace in the region.