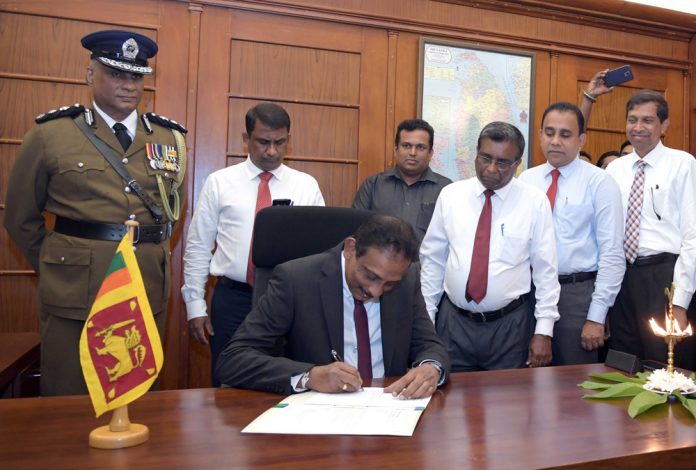 The Deputy Governor to Central Bank of Sri Lanka Mr. S.R. Attygalle who has been appointed as the Secretary to Ministry of finance and the Secretary to Treasury by President Gotabaya Rajapaksa assumed duties in his new post at the Ministry of Finance, Secretariat Bldg, Colombo 01 Wednesday November 20, 2019.

Mr. Attygalle who is from the Central Bank of Sri Lanka (CBSL) had earlier served on release, as a Deputy Secretary to Treasury for more than 10 years and also as the Treasury Secretary and Secretary to the Ministry of Finance and Economic affairs for a short period.

He had also served as the Director General of the Department of Fiscal Policy and Department of Public Enterprises of the Ministry of Finance and Planning and has contributed substantially to the Government’s endeavors in the fiscal consolidation process.

Mr. Attygalle had previously served as a Director and Acting Chairman of National Savings Bank and a Director to the Board of Regional development Bank and also represented the Treasury as a Board Member in several Boards in key Government institutions such as Sri Lanka Ports Authority.

At the time of his appointment to the new post he was serving as the Deputy Governer at the CBSL.

Acting IGP Mr. C.D. Wickramaratne Senior officials of the Treasury and Heads of Departments coming under the purview of the Ministry of the Finance were also present on this occasion.