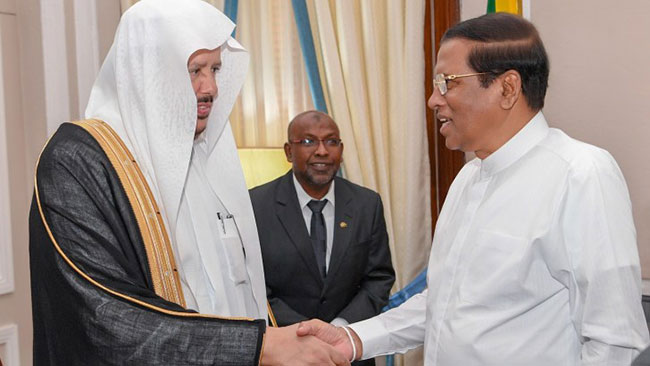 The Speaker of Saudi Arabia’s Shoura Council, the consultative assembly of the Kingdom, Dr. Abdullah Al- Asheikh said effective steps would be taken to establish a strong cooperation between Saudi Arabia and Sri Lanka parliaments.

The President thanked the Saudi Speaker for long-term assistance provided to development activities in Sri Lanka through the Saudi Fund. He also thanked Saudi Arabia for providing assistance to Muslim Hajj pilgrims who visit Macca. He requested to increase the Hajj Quota to Sri Lanka.

The Speaker said that the Saudi government has taken steps to increase the facilities available for pilgrims and the construction works would be completed next year. He added that the President’s request would be seriously considered to increase the Hajj Quota to Sri Lanka.

President Sirisena pointed out that 136,000 Sri Lankans are currently employed in Saudi Arabia. Speaker Al-Asheikh said that Sri Lankan workers are very popular in his country for their efficiency and his country would take steps to offer more employment opportunities to Sri Lanka.

Dr Al-Asheikh said that the Kingdom and Sri Lanka shared a similar goal in combating terrorism which was not related to religion or race. He lauded Saudi-Sri Lankan bilateral relations which he said were growing stronger based on cooperation and friendship under the two countries’ leaderships.

The Speaker said that during the visit he aimed to discuss a number of issues of common interest between the Shoura Council and the Sri Lankan Parliament.

Speaker Al-Asheikh arrived in Sri Lanka for an official visit on an invitation by the Speaker Karu Jayasuriya.