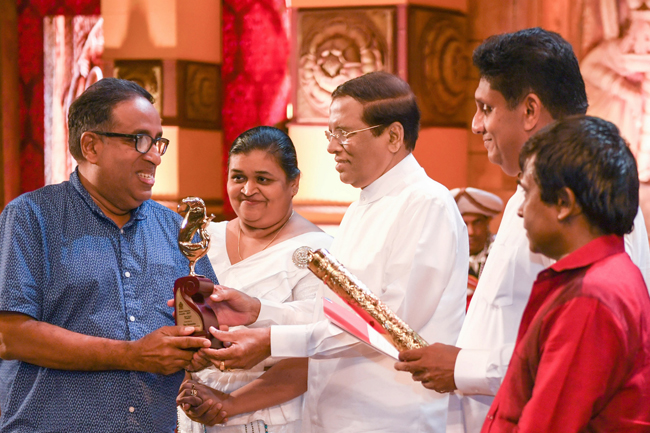 The State Literary Awards Ceremony 2019, an occasion to give due accolades to the literati who have enriched the field of literature in Sri Lanka, was held under the patronage of President Maithripala Sirisena at the BMICH yesterday (12).

Many authors received awards for their invaluable contribution and excellence for the advancement of the literature in the year 2018.

In addition, the President presented “Sahityaratna” lifetime award to Prof. Walter Marasinghe, Ayyathurai Santhan and Kamala Wijeratne for their great service towards the advancement of the local literature field in Sinhala, Tamil and English languages respectively.

The award for the best independent Sinhala novel was received by Author Virajini Tennakoon for “Makaranandaya”.

Captain Elmo Jayewardene was vested with the award for the best independent English novel for his literary work, “Kakiyan”.

Meanwhile, the award for the best book of poetry of the year was bagged by Mr Nandana Weerasinghe’s “Kshananiyaama”.

Minister of Housing, Construction & Cultural Affairs Sajith Premadasa, Secretary to the Ministry Bernard Wasantha Director of Cultural Affairs Anusha Gokula Fernando, Professor Samantha Herath of the State Literary Advisory Board and many other distinguished guests were present at the event.