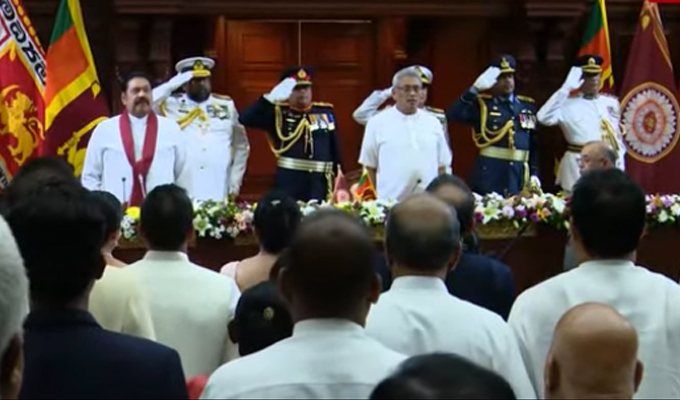 The event, graced by many other distinguished guests, is taking place at the Presidential Secretariat in Colombo.

Former President Maithripala Sirisena and former Prime Minister Ranil Wickremesinghe, who officially stepped down this morning, were also present on the occasion.

Earlier today, former Premier Ranil Wickremesinghe stepped down from his position and tendered his resignation to President Gotabaya Rajapaksa.

Meanwhile the interim Cabinet of Ministers, which was scheduled to be appointed today, has been put off until tomorrow (22)

Mahinda Rajapaksa had served as Opposition Leader of Sri Lanka until his appointment as the new Premier today.

This is the third time Mahinda Rajapaksa is taking office as the Premier. He had been appointed Prime Minister after the UPFA had gained a slim majority at the Parliamentary Elections of 2004.

He had briefly served as Prime Minister again, for a period of just 52 days, during the time of the constitutional crisis in the country in October last year.

Two brothers are holding the top positions in the government for the first time in the history of Sri Lanka.