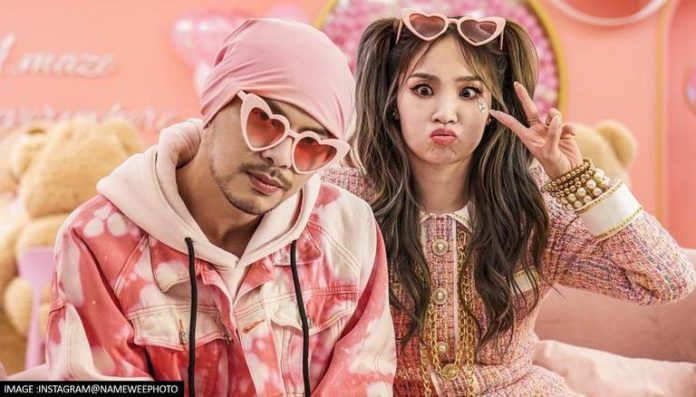 At the outset, the song appears to be a saccharine melody, with a video showing pink-coloured sets and a dancing panda, featuring Namewee and Kimberly.

It starts with a warning, ‘Please be cautious if you’re a fragile pink.’ The song contains multiple mentions of the ‘pinks’ and their ‘fragile self-esteem’. It further ridicules the Chinese internet warriors with the lyric, “You say NMSL to me when you get angry.” NMSL is an acronym for offensive internet slang, “ni ma si le”, which translates to “hope your mother dies”, and was central to an online meme war between the Chinese and Thais last year.

The song also uses the term ‘Pooh’, a reference to Winnie the Pooh, a Disney character that is often used by netizens to troll China’s President Xi Jinping. In fact, in 2017, China banned the character, and in 2018, it had reportedly banned the movie ‘Christopher Robin’ in an attempt to censor posts online comparing the character to the Communist Party leader.

The music video goes on to show the panda cooking a ‘bat soup’ and serving a stuffed-toy bat on a plate to the duo — a veiled reference to the rumours that the coronavirus pandemic originated from bat-eating Chinese. “Desiring for dogs, cats, bats and civets…” one of the lyrics reads.

“It is illegal to breach Firewall. You’ll be missed if the Pooh discovers it,” the song goes. The ‘Great Firewall of China’ is a popular coinage referring to a series of laws enforced in China to regulate the internet usage of its citizens – from blocking Google and social media platforms like Facebook and Twitter to crackdowns on popular shows, songs and films.

Fragile’ also brings up the human rights violation of ethnic minorities in China. “Carrying cotton and collecting his favourite honey,” one of the lyrics reads, referencing the forced labour camps in Xinjiang – reportedly catering to 20 per cent of the world’s cotton — where Uighurs are made to pick cotton. Several media houses in the past including the BBC and The Guardian have reported on such detention camps that exploit ethnic minorities. The Chinese government, however, has denied these charges calling the camps vocational training schools as part of its “poverty alleviation scheme”, according to a BBC report.