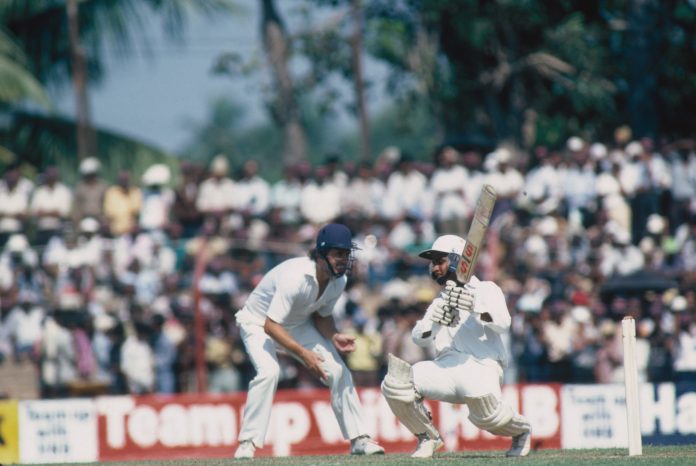 Today, 17th February, is the 40th anniversary of Sri Lanka’s inaugural Test match and marked a special milestone in the history of Sri Lankan cricket. Sri Lanka were making their test debut at Colombo’s Paikiasothy Saravanamuttu Stadium on 17th February 1982. Their opponents were England.

For Sri Lanka, the match marked the end of a long wait for test recognition. They first played first-class cricket as Ceylon in 1927 against the MCC and made their international debut at the 1975 World Cup.

For England, the contest came off the back of a gruelling tour of India. A 1-0 series defeat after six energy-sapping tests was quite a come-down from the euphoria of the summer of 1981 when Mike Brearley’s men so famously retained the Ashes.

Brearley had sauntered off into the sunset to be replaced by another wily veteran, Keith Fletcher, the Essex Captain who had last played for England in 1977.

“The Gnome”, as he was affectionately known, also had to contend with his fair share of off-field issues, including clandestine conversations that would eventually result in the first “rebel tour” of South Africa and the banishment of England’s record run-scorer Geoffrey Boycott, sent home for playing golf while off the field because of illness.

The change of scene in Sri Lanka came as a welcome relief for much of the squad, as did the unseasonal mildness at the P. Sara Stadium. Sri Lankan Captain Bandula Warnapura won the toss and elected to bat on a surprisingly sticky wicket. The sense of excitement and anticipation was palpable.

“The build-up was lively. There had been all kinds of pomp and circumstance in the preceding days. It was a bit surreal really, especially with the undercurrents of a potential rebel tour, there were all sorts of side issues going on.”

“We found out we had been granted test status in a Yorkshire hotel during our 1981 tour of England. We were very excited and there was huge expectation from both players and fans. In the 1975 World Cup, we had given Australia a real scare. We firmly believed that we were good enough to compete with the best in the world.”

“I remember the changing rooms were still being painted the day before the test started!”

England got off to a flying start. Headingley heroes Bob Willis and Ian Botham dispatched both openers, Warnapura and Wettimuny. On the moist track, the ball was spitting viciously and Willis was finding a steepling bounce. Roy Dias and the pugnacious Duleep Mendis, who had hit his country’s first boundary, soon followed.

“I was very nervous. The one thing we lacked was experience against international sides, so there was still an awe of players you had heard a lot about. Willis was pretty nippy and Botham’s great strength was his unpredictability. He was quite capable of a terrible delivery followed by an incredible one. He had an annoying knack of getting people out with bad balls, which is what happened to me!” – Sidath Wettimuny

“Facing Bob Willis was quite an experience with that action and that hair. We had faced quicks in Australia but nothing quite like Willis!” – Duleep Mendis

“The pitch was damp. I can’t remember whether they’d covered it but even if they had, it wouldn’t have made any difference as they didn’t have very good covers anyway. But it wasn’t a bad cricket pitch, there was a turn and the seamers could get it through.” – Keith Fletcher

Making his debut for Sri Lanka was a svelte schoolboy by the name of Arjuna Ranatunga. Sporting an over-sized helmet and brandishing a patched-up “SS Jumbo” bat, the 18-year-old Ranatunga looked every inch a 1980s schoolboy. Bob Willis welcomed him with a bouncer, but the teenager was soon displaying the confidence and appetite for the fight that would become his trademark. His half-century, the first by a Sri Lankan in tests, was full of attacking brio off the front foot and feisty flicks to leg, particularly off the wayward Paul Allott. The partnership of 99 with Ranjan Madugalle, later an International Cricket Council (ICC) match referee, took the score from 34/4 to 133/5.

“We never felt the importance of test cricket as schoolboys but when I was picked to play in the one-day series and then the test, I realised this was something far bigger than school and club cricket. Nobody was expecting me to perform so there was less pressure on me and I played that game as just another game.” – Arjuna Ranatunga

“Ranatunga had first played against us in the warm-up match in Kandy. He was quite a feisty character even as a teenager.” – Graham Gooch

“We all knew about him. I played with him right the way through my career at Singhalese Sports Club (SSC). Seeing him walking into bat was a matter of huge pride for us because we knew he was going to be a great player.” – Duleep Mendis

As the pitch began to dry out in the afternoon, Derek Underwood came into his own. Now 36 and in the twilight of his career, he finished with miserly figures of 5/28 off 18 overs. It was the Kent left-armer’s first five-wicket haul since 1977. Sri Lanka were all out for 218.

“I’d got the best match figures of my career at the same ground for an International XI in 1967/68, 15 in the match, so I was comfortable on that wicket.” – Derek Underwood

“The wicket was still drying on day one which played into the hands of Underwood, who was a master in those conditions.” – Duleep Mendis

In reply, England also got off to a shaky start. The powerfully built 22-year-old Ashantha De Mel was Sri Lanka’s secret weapon, a fast bowler of genuine pace. Northamptonshire’s Geoff Cook, making his test debut, fended to gully. Tavaré was bounced first ball and yorked the next. Gooch was adjudged lbw. England were 40/3.

“De Mel wasn’t what you’d expect from a Sri Lankan at that time. They were known for their diminutive players and their spinners, but he was a big strong lad. We didn’t know much about him.” – Geoff Cook

“We didn’t have any speed guns back then. I was running in and bowling as fast I could. I hit Tavaré on the head and then bowled him the next ball. To play the first test match, bowl the first ball, and take the first wicket makes me feel very fortunate.” – Ashantha De Mel

A typically languid 89 from David Gower rescued England, but their lead going into the second innings was just five runs. As the thermostat rose, England bowlers toiled against the dashing Dias. By the end of the third day, the hosts had reached 152/3.

“I’d been there before on smaller trips with the MCC and other sides. I did know what to expect. I knew they’d be no pushover in their own country.” – Keith Fletcher

“I had played at University with Gajan Pathmanathan who took the Yorkshire bowling apart in a ‘Benson & Hedges’ match at Barnsley in 1976. So I knew Sri Lankans had great flair as batsmen.” – Chris Tavaré

“They were absolutely in the game. We’d had that tough tour of India and suddenly this match was slipping away from us. We went in very cold. There were no videos and no team meetings in those days. We didn’t do the homework on the opposition like they do these days.” – John Emburey

There were also further gripes about the standard of the officiating. The two on-field umpires were Herbi Felsinger and Kandiah Thirugnansampandapillai (KT) Francis.

England regrouped on a dramatic fourth morning. From 167/3, Sri Lanka lost their last six wickets for eight runs to a series of injudicious shots. Off-spinner Emburey finished with 6/33 off 25 overs. It was an extraordinary turnaround.

“They were a bit like the early West Indian teams, if you kept them quiet for a few overs, they would do something rash, and thankfully they did.” – Keith Fletcher

“We hadn’t played five-day cricket, all we played was club cricket which was two days. I put it down to sheer lack of experience because we had England where we wanted and we let it go. I will never forget that passage of play. England knew they were in trouble. They knew we were the kind of guys who would block or attack. We weren’t going to work the ones and twos. Emburey had an inner ring and an outer ring but nothing in the middle. We fell into the trap.” – Sidath Wettimuny

“For me personally it was great. It was my first six-wicket haul in tests and to do it partnering Derek Underwood made it all the more satisfying.” – John Emburey