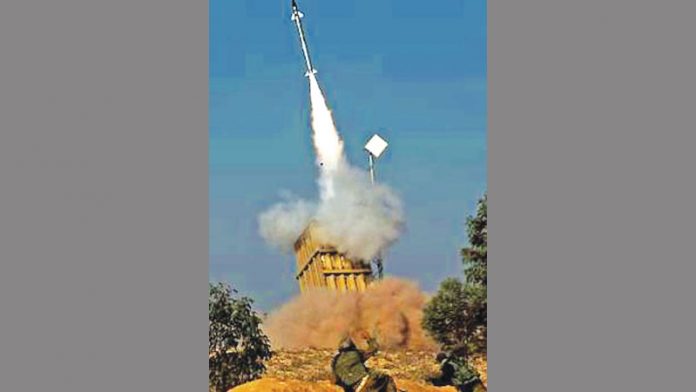 ISRAEL: Israel’s Prime Minister Naftali Bennett announced a major technological shift in its security when he said that the country’s will surround itself with a “laser wall”, a new way to intercept missiles.

Bennett was addressing a security conference on Tuesday where he said that Israel is speeding the rollout of laser technology to help protect it from rocket attacks. The “laser wall” will be unveiled within a year in southern Israel, he added.

The Israeli PM also acknowledged that its Iron Dome defence system is too expensive.

Little is known about the system’s effectiveness, but it is expected to be deployed on land, in the air and at sea and send a deterrent message to archenemy Iran and its proxies.

The lasers are designed to complement Israel’s multilayered defenses – which include the Iron Dome and other systems capable of intercepting long and medium-range missiles and drones.

“If it is possible to intercept a missile or rocket with just an electric pulse that costs a few dollars, we will have nullified the ring of fire that Iran has set up on our borders,” Bennett said. “This new generation of air defense can also serve our friends in the region,” he added.

Israel’s Defence Forces have been testing the ‘laser wall’ technology since June last year. It installed the powerful laser on an aircraft and it downed several unmanned aerial vehicles (UAVs) within a range of one kilometre. The ministry said that the system had a success rate of 100 per cent. The Israeli Government now wants to install a laser with a power of 100 kilowatts and a range of 20 kilometres. – THE HINDUSTAN TIMES