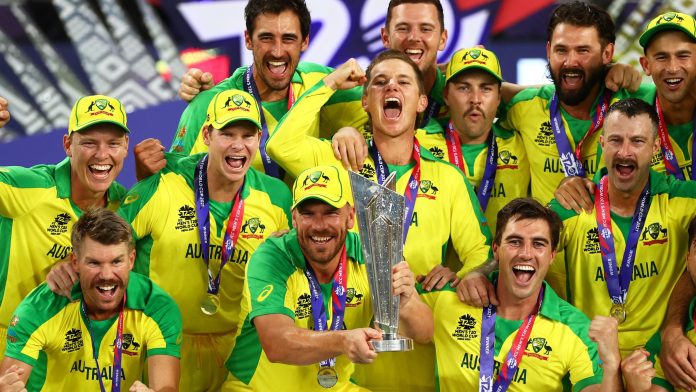 Marsh and Warner’s brilliant knocks came after New Zealand captain Kane Williamson had responded to losing the toss with a classy innings of his own, with his 85 off 45 helping the Black Caps to 172/4.

At the time, it was the highest score a team had posted in a Men’s T20 World Cup Final.

But Australia started the chase well and rarely took their foot off the gas as they raced to the World Cup title with eight wickets and seven balls to spare, sparking jubilant celebrations in the UAE.

Australia had lost skipper Aaron Finch early when he top-edged Trent Boult to Daryl Mitchell in the deep. But the in-form Warner got off to a decent start, while it was Marsh who upped the rate most spectacularly early on, smashing 14 runs off the first three deliveries he faced.

With Warner and Marsh still at the crease, Australia reached 43/1 at the end of the Powerplay.

And the pair went through the gears as the spinners came on, adding 39 runs in the following four overs to leave them needing 91 from 60 to win the T20 World Cup at the halfway stage of the reply.

Marsh reached his half-century three deliveries quicker than his team-mate to set a new record for the fastest 50 in a T20 World Cup Final, and finished on 77 from 50.

And it fell to Glenn Maxwell to see it over the line for Australia, as he unfurled the switch-hit to send Tim Southee for four and prompt a stream of yellow-shirted teammates to flood onto the pitch and join in the huge celebrations.

Earlier, Martin Guptill and Mitchell had got the Black Caps off to an initial flier. Starc struggled to find swing with the new ball in the opening over with Guptill crunching a cut away for four off the second delivery to set up a nine-run opening over.

And an eventful third over, the first for Glenn Maxwell, saw Mitchell smoke the all-rounder for a six off the first ball before Matthew Wade failed to cling on to an under-edge from Guptill to give the Black Caps opener an early let-off.

But the Australians didn’t have to wait too much longer for their first wicket as Hazlewood found Mitchell’s outside edge for 11.

And Hazlewood’s relentless line and length brought the Powerplay back under control for Australia as the Kiwis reached 32/1 after six. The Kiwis found their flow immediately after the drinks break, with Starc going for 19 in the 11th over as Hazlewood’s fine evening taking a turn when he failed to take a catch in the deep to dismiss Williamson.

But the topsy-turvy nature of the match continued just as New Zealand looked set to let loose, with Zampa luring Guptill into a miscued flick that was held by Marcus Stoinis in the deep to send the opener back for an uncharacteristically slow 28 off 35.

Williamson, looking in fine touch, raced to 51 off 33 balls as he smashed Maxwell for back-to-back sixes to reach his milestone. And the New Zealand captain’s takedown of Starc set New Zealand up brilliantly to reach the sort of total that had looked a long way off after ten overs.

But Williamson’s efforts were ultimately in vain, with Marsh and Warner making mincemeat of the chase to complete an eight-wicket win for Australia on the biggest stage.

Victory for Australia is their first T20 World Cup title, with the Aussies set to defend their T20 World Cup crown as hosts in 2022.