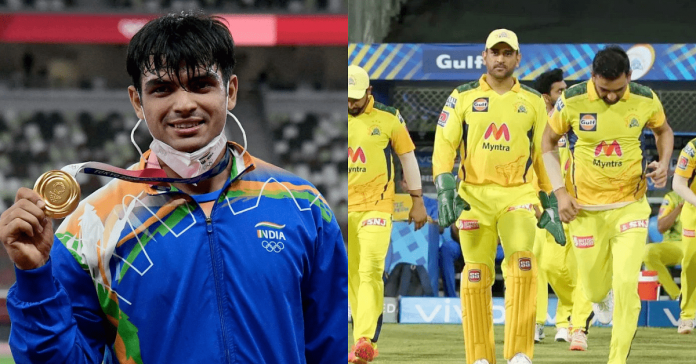 The MS Dhoni-led franchise said that it will be creating a special jersey with the number ‘8758’ as a mark of respect to Neeraj Chopra.

The MS Dhoni-led franchise also said that it will be creating a special jersey with the number ‘8758’ as a mark of respect to Neeraj Chopra. CSK chose the number 8758 because of his winning throw that sent the javelin to a distance of 87.58 metres.

We as Indians are proud of Neeraj Chopra as his effort at Tokyo 2020 will inspire millions of Indians to take up sport and instil belief in them to be able to compete and excel at the highest level in any discipline of the sport. His Gold medal-winning throw of 87.58m in the Men’s Javelin has galvanised the entire nation,” the CSK Spokesperson said.

Neeraj Chopra won the men`s javelin on Saturday with a best throw of 87.58 metres to claim a historic first Olympic athletics gold medal for India. The Czech Republic`s Jakub Vadlejch won silver with 86.67 metres and Vitezslav Vesely claimed the bronze with 85.44.

Chopra became only the second Indian to win an individual Olympic gold medal after Abhinav Bindra won the 10-metre air rifle event at the 2008 Games.

Board of Control for Cricket in India (BCCI) secretary Jay Shah on Friday announced Rs 1 crore cash reward for India’s Olympic star Neeraj Chopra. The 23-year-old track and field athlete, who secured India’s first medal at the Olympics, won the gold medal in the finals of the men’s javelin throw event in Tokyo 2020.

Such was his dominance that Chopra stood top amongst all the twelve participating members in all the six rounds as he bagged the gold with a monstrous 87.5m throw in his second attempt.