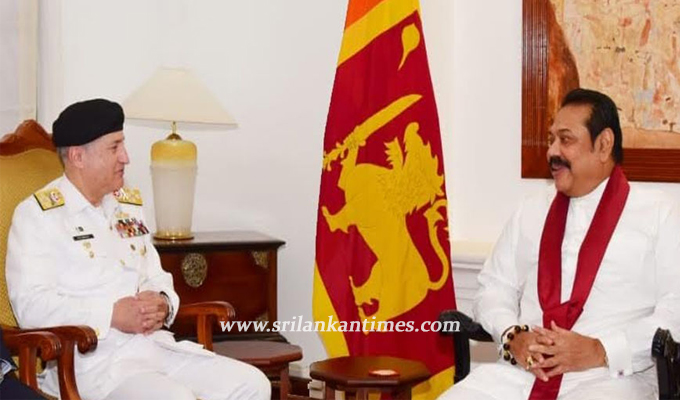 Chief of Naval Staff of Pakistan Admiral Zafar Mahmood Abbasi, who is on an official visit to Sri Lanka, has called on Prime Minister Mahinda Rajapaksa this morning (28).

The duo has discussed the continued cooperation between the armed forces of both nations while the Premier recalled the support received by the Pakistan military during the war.

The visiting Pakistani naval chief has also expressed his gratitude to the government and the Sri Lanka cricket team who toured Pakistan last December for the first time since the terror attack on the cricket team whilst touring Pakistan a decade ago.

Back in 2009, Sri Lankan cricket team came under a terror attack near the Gaddafi Stadium in Lahore by a group of masked gunmen while they were on their way to play the third day of the second Test match against Pakistan. Several of the team members sustained injuries while six Pakistani policemen and two civilians were killed.