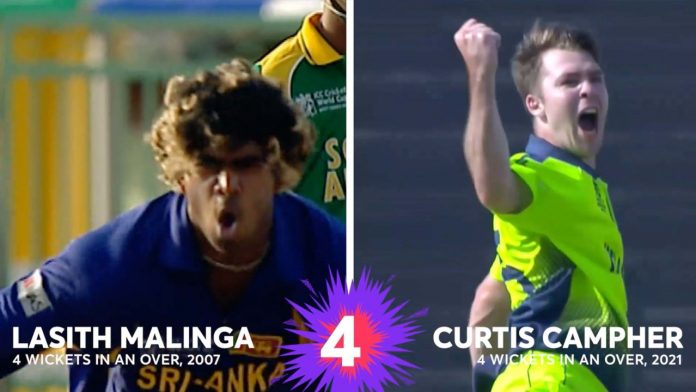 Curtis Campher became only the third bowler to claim four wickets in as many balls in a Twenty20 international – and then hit the winning runs as Ireland defeated the Netherlands at the Twenty20 World Cup.

Campher, who hit a half century on his one-day international debut against England two years ago, turned the game with the dismissals of established county players Colin Ackermann, Ryan ten Doeschate and Roelof van der Merwe plus Scott Edwards as the Dutch plunged to 51 for six in the 10th over.

The 22-year-old seamer’s performance in Abu Dhabi matched the feats of decorated performers Rashid Khan and Lasith Malinga, who both managed four in four in 2019 – although the former’s haul was claimed across two separate overs.

He was bowling his second over for the day, having gone for 12 runs first up.

Ackermann was out caught behind on review, having played an attempted pull off a shortish ball that seemed to be going down leg.

The seasoned Ten Doeschate, best remembered for his incredible century against England in the 2011 World Cup, was out for a duck, trapped in front by a full and straight one.

Edwards too fell lbw as DRS (decision review system) tracked the ball hitting the leg stump. For his final wicket, van der Merwe played on to his stumps a widish delivery, leaving the Irish camp in a state of frenzy.