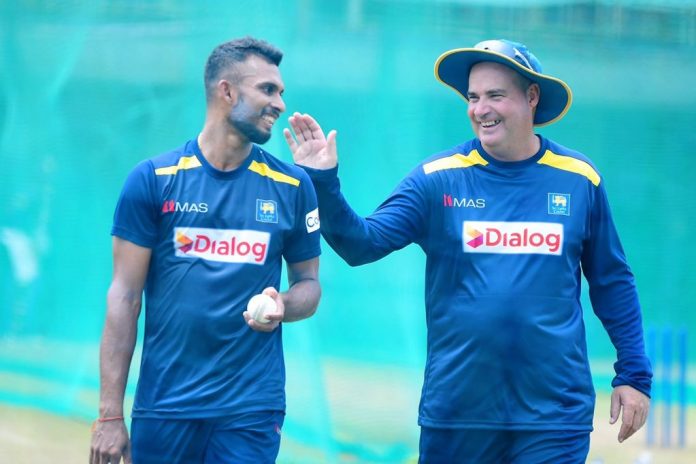 The Sri Lankan team has been in different bubbles for as many as 238 days. They’ve entered another one in the UAE where they’re eyeing a place in the top 12 at the ICC T20 World Cup. Having found themselves out of the top 8 at the qualification date, they are now in Group A alongside Ireland, Namibia and the Netherlands. The top two from each group will qualify to compete with the eight who gained direct qualification.

One factor that would work in Sri Lanka’s favour, despite the inexperience in their side, is the wealth of it that their coaching staff brings. Mickey Arthur, the head coach, Grant Flower, the batting coach, part of Pakistan’s coaching staff for three years prior to their current stint, spent a lot of time across the UAE with more than a fair idea of conditions. Add to that Mahela Jayawardene, who joins the team as a mentor, brings with him his experience from the just-concluded IPL.

Arthur, in a candid chat ahead of Sri Lanka’s first game against Namibia, opens up about how Sri Lanka’s side came together despite a tumultuous year where they won just 3 of the 12 T20Is played. And, with the bans levied on Niroshan Dickwella, Kusal Mendis and Danushka Gunathilaka for breaching the bio-secure bubble in England, how it has opened up doors. Also how important it is for the side to gain some confidence.

The last year or so has not been ideal; there were quite a few things that perhaps went against what you envisioned?

It’s been tough. This is the one format that needed the most work for us and then once we lost those three players, it was almost back to the drawing boards again. But out of adversity comes a lot of good. We’ve found some young players that can fit in. Charith Asalanka… Bhanuka Rajapaksa has come back, Pathum Nissanka has come back into the team. So some good has come. It’s given the guys an opportunity to show what they can do, to stand up. I’m pretty clear where we are in terms of Tests and ODI cricket. We sort of got those covered now. It was Twenty20 cricket that was the format that required the most amount of work and we’re getting there. The Test team is taken care of, our ODI team has gotten better and better. Our T20 team is what we needed to nail and it’s taken a lot of work, we’ve looked at a lot of combinations and we’re comfortable now that we have quite a nice mix.

How is the feeling around the group?

How much of a role did the training camp last month help in defining those roles?

It paid off quite a lot. That training camp allowed us to look at different options. We moved Avishka Fernando from opening the batting to No.4. We looked at certain options and we just looked a far better unit. We’ve persisted with that. Kusal Janith Perera is back which gives us a massive life at the top of the order, so we’re starting to look a good combination now.

How about the opening pair? Three pairs were tried in four games… is there a set one now?

Getting (Kusal) Perera back is massive, so he opens the batting. He was out with injury so we were looking for options, but he was always the constant. He was always going to come back. He comes back now and young Pathum Nissanka has played beautifully. So between the two of them I’m hoping something good develops there. We’ve got every spot covered now, but it’s only the No.3 spot we’re kind of having a look at.

Skipper Dasun Shanaka was quite optimistic about Sri Lanka’s chances, but there’s quite a bit of inexperience in the squad. Will that make a difference?

I think it will. We’re confident though. Yes, we are young and a very inexperienced team. It was a decision we took a while ago to go with these young players. But these young players have stood up now and shown us what they can do. So we are going to be a little inexperienced, that can also be seen as a massive positive because there’s not going to be the fear of failure. The guys are going to play with the exuberance of youth and I think teams that play that way are going to go a long way in the competition.

What are your expectations from the side in the tournament?

For us to go deep. It’d be such a great stepping stone for this team, just in terms of their confidence, knowing that if they push themselves to the limit, they can get the reward. We’ve worked unbelievably hard and my mantra has always been hard work will give you success. If we go fairly deep in the competition and do quite nicely, it just sort of strengthens those words and the guys will get a lot of confidence and satisfaction out of it.

It would’ve been a massive boost of confidence for Wanindu Hasaranga and Dushmantha Chameera to be a part of the IPL. What did they bring into the side post that stint?

They brought a lot confidence. They brought confidence in their own game and abilities being recognized to play at that level. It gave our whole system a lot of confidence because suddenly the young boys, who we’ve been grooming looked at these guys and thought, ‘that could be me in a couple of years if I stay on track and do things right’. That they could progress that way. So that was good for them in that sense where they saw others got recognition through their good form. The two guys got a lot of confidence. There was a strut in their step, they realized they could mix with the big boys and they weren’t out of place in any of those set-ups.

What’s going to be the key for Sri Lanka to do well?

Gaining some confidence. The key is getting in and playing to the best of our ability straight up. Getting a good win early just to breathe in that confidence, momentum, that’s why the first game is so important.

Shanaka expressed quite a bit of optimism ahead of the tournament. What kind of a captain is he?

He’s bit of a silent assassin (chuckles). He’s a bit quiet, goes about his business in a quiet way. He’s got a very steely resolve to him. He’s very determined and ambitious guy. Again for him, getting in those early wins will breathe in some confidence.

And finally… how good has it been to have Mahela in the mix?

It’s wonderful to have a guy like Mahela around. He’s an incredible tactician and he’s got a wonderful cricket brain. For me it’s been amazing, it’s having another set of fresh eyes having a look at our set-up. It’s really exciting for everybody.