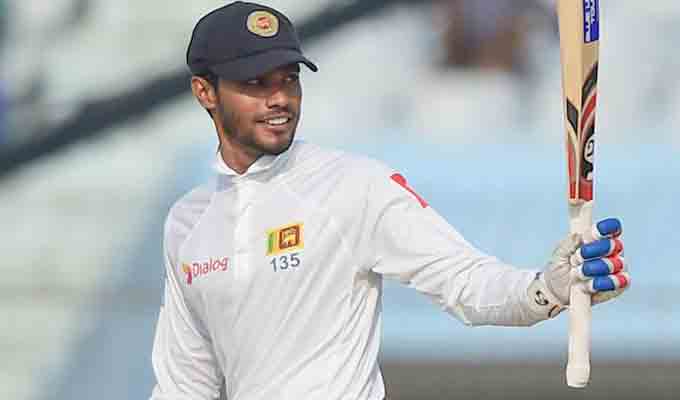 Dhananjaya de Silva composed an impressive 109 to help Sri Lanka recover from a spot of bother and lifted them to a competitive 244 at Lunch on Day 3 of the Colombo Test versus New Zealand. Meanwhile, Tim Southee was the pick of the bowlers for the visiting side, bagging four wickets.

Unlike the first two days, Day 3 started on a brighter note with play commencing on time. Dhananjaya and Dilruwan Perera added useful runs in the first hour with a crucial stand of 41 for the seventh wicket. The middle-order batsman cut, used his feet and also steered New Zealand’s bowlers, and received valuable support from Perera. The duo threatened to stitch a substantial alliance, but against the run of play, Ajaz Patel trapped Perera with the arm ball. Perera took the review but couldn’t reverse the decision.

Despite losing his batting partner, Dhananjaya batted with confidence and strung together another vital stand and this time with Suranga Lakmal. He slog-swept Ajaz and even took Trent Boult’s short ball to crack a six via the pull. Dhananjaya and Lakmal pushed the score to 214 before the latter fell to Southee’s short ball. The pacer also accounted for Lasith Embuldeniya’s scalp by winning an LBW decision against the lower-order batsman.

With Embuldeniya being dismissed, the hosts found themselves nine down and Dhananjaya on 94. The right-hander then decided to hit the accelerator pedal as he smacked Boult into downtown territories and reached a well-deserved ton with a thick edge off Southee. Lahiru Kumara also played his part by hanging around for a while before Boult broke the stand by cleaning up Dhananjaya and wrapped up Sri Lanka’s innings. Southee and Boult used the moisture to their advantage and shared seven scalps. The tourists also would be left to ponder about the sitter that Boult fluffed off his own bowling on Day 2.

The pair of Jeet Raval and Tom Latham then took New Zealand to the break. The track is definitely helping the pacers and moisture could also bring in spinners into play.