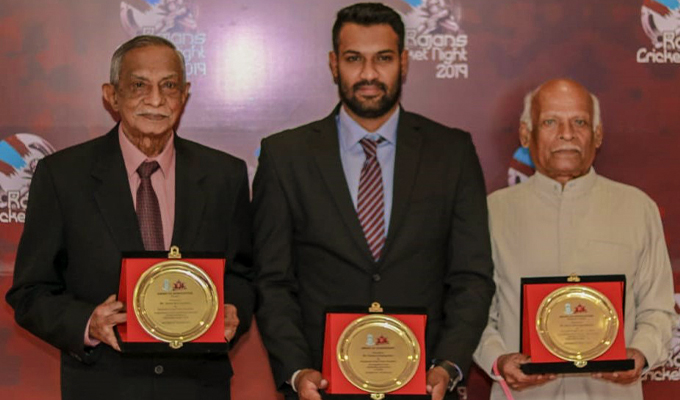 The Dharmaraja College Cricket Foundation (DRCCF) held a felicitation ceremony during  Rajans cricket at the Grand Kandyan hotel recently, where three formidable cricketing personalities were recognised for their great contribution for the school and beyond. From the three recipients, two were honoured with ‘awards of appreciation’ for their yeomen services as cricket officials of Dharmaraja College while the other was presented with an ‘award of achievement’ for excelling in the sport and going beyond the line to represent the country with honour.

The recipients of ‘awards of appreciation’ were Mr. David Karunarathna, who was a long-standing coach of Dharmaraja, Mr. A.C.S. Jambugahawatta, a master-in-charge of the school in cricket for nearly three decades.

Renowned Sri Lanka top-order batsman Chamara Kapugedara was conferred with the ‘award of achievement’ for his outstanding feats in cricket at the highest level that brought honour to Dharmaraja.

Cricket coach Karunarathna was an outstanding player of 1956, who played in the school team from1952 to 1956. He maintained a good average in batting and bowling, and went on to play for Combined Colleges and the Central Province Cricket Association (CPCA) team against the touring Madras Cricket Assocation team at Asgiriya. He contributed to the CPCA’s victory taking 13 wickets (5/42  and 8/ 37). He joined Dharmaraja as coach in 1984 and continued until 2004. Karunarathna was presented the award by Senaka Dissanayake, the captain of the Dharmaraja team in 1984 and represented Sri Lanka under 19 team under Aravinda de Silva and also the first Rajan to score 1000 runs in a season and still holds the record for the highest scorer of the big match when he scored 200 against arch rivals Kingswood 1983.

Master-in-charge Jambugawatte who was an influential character to all cricketers of Dharmaraja, served in his role from 1970 to 1999, one of the officials who made a steady and longstanding contribution to the sport at school. His award of appreciation was presented by Ananda Jayasundara, who played for Dharmaraja from 1963 to 1965, and rated as country’s fastest bowler in 1964.

Kapugedara, a household name in global cricket, captained Dharmaraja First Xi during the 2005 school seasons. He earned his international debut in a One Day International against Australia, in Perth in 2006, and made his Test debut at the Lord’s against England the same year. Kapugedara captained the Sri Lanka ODI team in July 2017 against India. His award of achievement was presented by Mahinda Pethiyagoda, the Dharmaraja captain of 1972/1973, and vice captain of Sri Lanka Schools team of 1973.