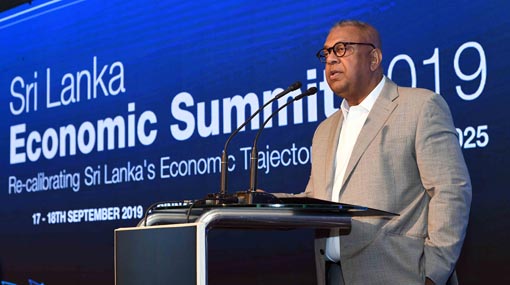 Reconciliation is an absolute necessity for economic development, according to the Minister of Finance Mangala Samaraweera.

He says that there is no way of harnessing our potential as a modern, stable, prosperous nation, except to celebrate the diversity of our country as a multi-ethnic, multi-religious and multi-lingual nation.

By the defeat of the LTTE in 2009, instead of it being a new beginning for the country it became a re-enactment of scenes from the ‘Mahavamsa’, embarking on a project to establish autocratic family rule, where the majority revealed in ‘patriotic fervor’, and democratic institutions and other checks and balances were systematically dismantled, said Samaraweera.

He says while Sri Lanka needs decisive leaders, it cannot realize its economic objectives with leaders who decisively sack the judiciary, decisively murder, decisively undermine the rule of law and cultivate a culture of impunity, decisively ignore procurement procedures for their own benefit, and decisively expropriate private investment.

The Finance Minister also stated that there can never be sustainable economic development without democracy and the rule of law.

One important reason for Sri Lanka’s failure to diversify exports beyond tea and apparel is the lack of adequate Free Trade Agreements (FTA), he said.

“Between 2005 and 2015, Sri Lanka did not sign a single FTA. Today Sri Lanka has six FTAs. But we are still far behind our competitors”, he said.

According to Minister Samaraweera, the Sri Lankan foreign policy must be based on openness and confident engagement instead of defensive and protectionist posturing and arrogance.

Samaraweera pointed out that Sri Lanka Podujana Peramuna (SLPP) Gotabaya Rajapaksa has also cited the Sri Lankan judiciary to be independent and received international praise as of recently.

“Even Mr. Gotabaya Rajapaksa, in his recent submission to the California courts, stated that ‘recent developments bolster the idea that the Sri Lankan judiciary is capable’. He cited reports that praise the Sri Lankan judiciary for ‘demonstrating their independence’ during last year’s coup. He also notes that challenges to judicial independence ‘have since been addressed, winning praise from international monitoring organizations’”