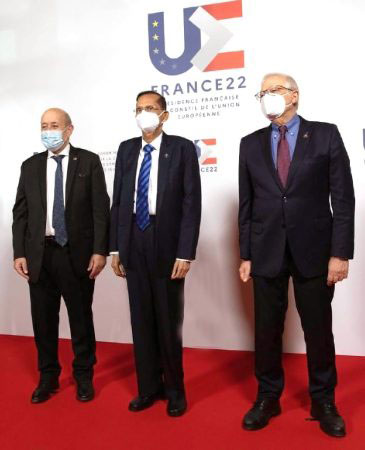 Foreign Minister Prof. G.L. Peiris addressed the Ministerial Forum for Co-operation in the Indo-Pacific, which was held at the Conference Centre of the Ministry for Europe and Foreign Affairs in Paris.

This was part of the programme of the French Presidency of the Council of the European Union, the Foreign Ministry said.

The Foreign Minister of Sri Lanka participated in the round table covering global challenges in the fields of health, climate, biodiversity, and the oceans. Other topics dealt with included connectivity and digital issues, security, and defence.

Sixty delegations participated in the symposium which was jointly organised by Foreign Minister of the French Republic Jean-Yves Le Drian, and High Representative of the European Union Josep Borrell Fontelles.

Minister Prof. Peiris explained to the Foreign Ministers present the policy adopted by Sri Lanka for the control of Covid-19 and attributed its success to the perceptive balance which underpinned the country strategy.

Delivery of two vaccines and the booster throughout the country received the highest priority and accounted for the significant protective cover extended to the population. Lockdowns were resorted to sparingly and selectively, in the interest of preservation of livelihoods.

The Foreign Minister described the pioneering role of Sri Lanka in ocean related matters, as the current chair of BIMSTEC and Co-Chair of The Indian Ocean Rim Association (IORA).

He referred to widespread recognition of the Colombo declaration on sustainable nitrogen management, and Sri Lanka’s success in the preservation of mangroves in particular – an achievement explicitly noted at COP 26, an initiative of the British Prime Minister in Glasgow, Scotland, through acknowledgment of Sri Lanka as a Commonwealth Blue Charter Champion.

Minister Peiris made special mention of the cultural heritage of Sri Lanka, with its emphasis on the complementary nature of economic development and preservation of the environment – the cornerstone of Sri Lanka’s commitment to the green economy.

Sustainability in the exploitation of fisheries and other marine resources is central to the economic wellbeing of the Island nation, he said. Other aspects of immediate relevance to Sri Lanka, he continued, are enhanced connectivity in respect of trade and investment, education and cultural links, the promotion of tourism; as well as intelligence gathering and sharing.

The Foreign Minister concluded that the partnerships envisaged at the Ministerial forum in Paris are fortified by a strong foundation, in terms of shared commitment to the values of multilateralism, a rules-based approach to the regime of the oceans and the sanctity of overflight over, and the right of navigation through, international waters.