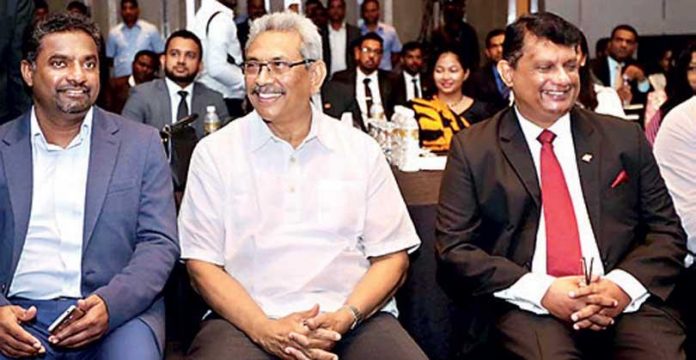 While majority of former Sri Lankan cricketer, including legendary Sanath Jayasuriya and Roshan Mahanama, have openly supported the ongoing public protests against the ruling government in the Island, former controversial off-spinner Muttiah Muralitharan expectedly urged peoples to stop their act!

Anger against Sri Lankan President Gotabaya Rajapaksa’s handling of a deepening economic crisis in the island nation of 22 million people spiralled into violence late on Thursday, as hundreds of protesters clashed with police for several hours. A severe shortage of foreign currency has left Rajapaksa’s government unable to pay for essential imports, including fuel, leading to debilitating power cuts lasting up to 13 hours. Ordinary Sri Lankans are also dealing with shortages and soaring inflation, after the country steeply devalued its currency last month ahead of talks with the International Monetary Fund (IMF) for a loan programme.

“At the moment we have to calm down, we have given the message, Govt has to take action now, Keep on protesting nothing is going to happen, it will affect tourism” he said during an interview to NewsX.

Murali is considered a loyal Rajapaksa’s supporter. Till recently, he was sitting in a so called Cricket Advisory Committee, along with Kumar Sangakkara and Aravinda de Silva, with the blessings of then Sports Minister Namal Rajapaksa. In 2020, his brother Muttiah Prabhakaran (an ethanol dealer) contested under Rajapaksa’s SLPP, but failed to win parliamentary seat from Nuwara Eliya District, even amid an otherwise landslide victory of the party.

“I support President Rajapaksa because he is the right person to lead our country,” Muralitharan had told the Hindustan Times in December 2019.