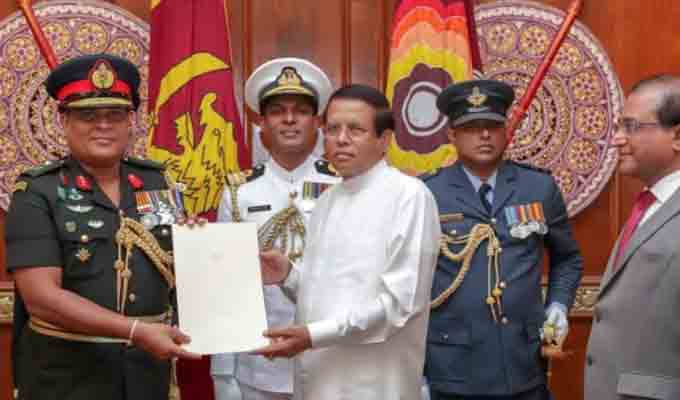 Lieutenant General Shavendra Silva has assumed duties as the 23rd Commander of Sri Lanka Army a short while ago at the Army Headquarters.

Adjutant General, Major General Jayantha Seneviratne afterwards warmly greeted the new Commander as he arrived at the parade ground and requested him to take the salute of the Guard of Honour of GR troops from the special dais, together with the Parade Commander.

Lieutenant General Shavendra Silva WWV RWP RSP VSV USP ndc psc was appointed as the 23rd Commander of the Sri Lanka Army, effective from 18 August 2019 by President Maithripala Sirisena as the Commander-in-Chief of the Armed Forces after he was elevated to the rank of Lieutenant General with effect from the same date.

He was serving as the Chief of Staff of the Sri Lanka Army and Colonel of the Regiment for Gajaba Regiment and Commando Regiment at the time he was made the Commander of the Army, the Army said.