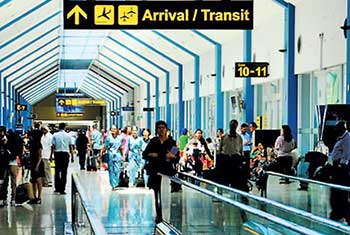 A Palestinian national who had arrived in Sri Lanka was detained and subsequently deported back to India by officials of the Department of Immigration and Emigration this morning (11), due to reportedly failing to explain the purpose of his visit to the island.

The 26-year-old Palestinian youth had made the visit to Sri Lanka while he had been pursuing higher education in India. He had arrived onboard a flight from Bangalore at around 7.00 p.m. last night.

The passenger was in possession of a temporary passport and when immigration officials at the BIA had inquired regarding his purpose of visit to the country, he had failed to provide a clear answer.

In addition to this, he had also failed to properly disclose details regarding the places he intends to visit and the hotel he was going to stay in.

The Palestinian Ambassador in Sri Lanka had also reportedly visited the Bandaranaike International Airport (BIA) in Katunayake to meet and discuss the matter with the immigration officers.

However, due to these reasons and considering the prevailing situation in the country, the officials decided to deport the Palestinian, and he was handed over to airline he had used to travel to Sri Lanka.