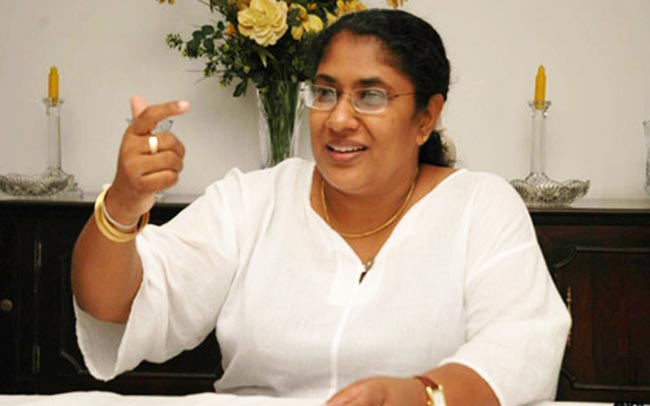 The Minister of Justice and Prison Reforms Thalatha Atukorale refutes the recent allegations by MP Udaya Gammanpila that the Sri Lankan courts have been influenced by foreign diplomats.

On 7th May, Pivithuru Hela Urumaya (PHU) Leader MP MP Udaya Gammanpila claimed, at the parliament, that an official from the Embassy of United States for Sri Lanka has exerted influence on the local judiciary during a workshop held in the US, which was attended by nine senior justices from Sri Lanka.

However, issuing a special press release today (12), Minister of Justice, Atukorale, called the allegations of the MP to be baseless and unsuccessful attempts to collapse the trust being placed on the Judiciary.

She further called these statements “dangerous and unacceptable”.

The complete press release issued by the Minister is as follows:

“The government of Sri Lanka rejects and condemns the recent comments made by the Hon. Member of Parliament, Udaya Gammanpila in the Parliament on 8th May 2019 that contained baseless allegations against Sri Lanka’s independent judicial system and threats directed at a foreign diplomat. I vehemently deny his comments and such attacks are dangerous and unacceptable.

The Department of Justice in the USA has extended mutual assistance to our judicial system in many ways. Many other countries, not solely the United States, offer this kind of partnership to Sri Lanka. Many Sri Lankans, including Members of Parliament, have benefited from similar exchanges. Likewise, the Supreme Court, Court of Appeal, and High Court judges have attended such programs. These engagements are carried out in a spirit of cooperation and mutual respect. Hon. MP Gammanpila’s attempt was seen as distorting information for political gain.

Mr. Patrick Ehlers has taken the initiative in organizing workshops for the Sri Lankan Judiciary. Accordingly, Judges comprising of two batches were invited to the USA in August 2018 and April 2019 respectively for workshops on best practices for addressing white collar criminal cases. As the purpose of establishing the Permanent High Courts at Bar is to hear and determine cases pertaining to misuse of public funds, corruption, and money laundering, etc., the Judges sitting in these Courts were attending the workshop on the recommendations being made by the Hon. Chief Justice.

Mr. Ehlers has also organized a workshop for 65 High Court Judges at the Taj Samudra Hotel in December 2018. Moreover, a batch of officials attached to the Attorney General’s Department is to proceed to the USA in a few weeks to attend a workshop.

Hon. Udaya Gammanpila, MP, has misled the Parliament by stating that he possesses a recording in which, court proceedings of a case before the Permanent High Courts at Bar is being discussed. Obviously, with the support of the Parliament privileges, the MP has attempted to make a baseless statement of this nature with the intention of committing contempt to the Judiciary and the Judges.

In the circumstances, insult leveled against the Judges, damages caused to the independence of the Judiciary and for the inconvenience that may have caused to Mr. Patrick Ehlers who has immensely supported the entire tour, it is advisable if the alleged voice recorder would be surrendered to the Hon. Speaker or the Hon. Chief Justice or Judicial Service Commission so that the actual facts to this incident may be disclosed.

On behalf of the Government of Sri Lanka and the Judiciary, I regret any pain or inconvenience which it may have caused to Mr. Patrick Ehlers, Legal Consultant attached to the Department of Justice in the American Embassy.

Hon. Udaya Gammanpila’s such baseless statements are unsuccessful attempts to collapse the trust being placed on the Judiciary.”