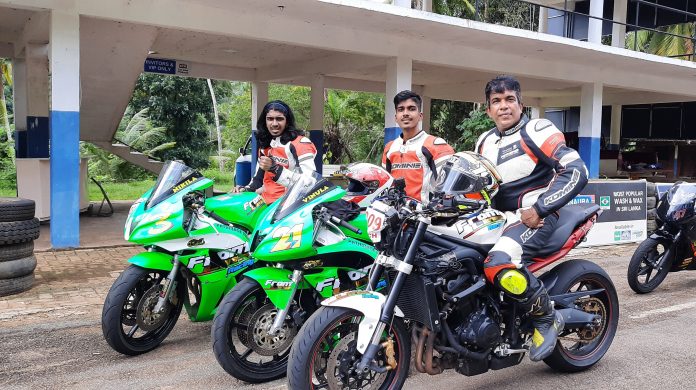 Pathirage’s family (Nikila Pathirage-Elder Son, Vinula Pathirage-Younger Son, Mangala Pathirage-Father)  has excelled in both domestic and foreign motorcycle racing, having won first, second and third places for most of 5 consecutive years in road racing (Tarmac) with an engine capacity of 150cc and 250cc. Winning stands out.

Mangala Pathirage, 52, an alumnus of Royal College, Colombo, is currently the most senior motorcyclist in the country. Entering the motorcycle racing arena in 1987, Mangala is still the champion of the Sports touring event (naked bikes- 600cc and over 1000cc). The two sons of Pathirage’s family members Nikila (age.22) and Vinula (age.19) who were able to bring great honour to the motherland have started riding motorcycles following their father. At the age of 10 and 12 years old respectively.

The father and sons have set an indelible record in Sri Lanka by winning 1st, 2nd and 3rd places in their event at the Hill Climb for many years, leaving a lasting impression on Pathirage name  in many other motorcycle races organized in the country.

Nikila and Vinula also represented Sri Lanka at the 2017 US Open in Dallas, Texas, USA and won 7th place in the world, it’s a great honour for this country.

It is also the first time in Sri Lanka as well as in the Asian region that a father and two sons from the same family excel in the motorcycle racing field. It is also noteworthy that no other family record has been set in the world of motorcycle racing.

However, it should be noted that they do not receive any government sponsorship for their national or international competitions and all expenses are borne by their personal wealth.