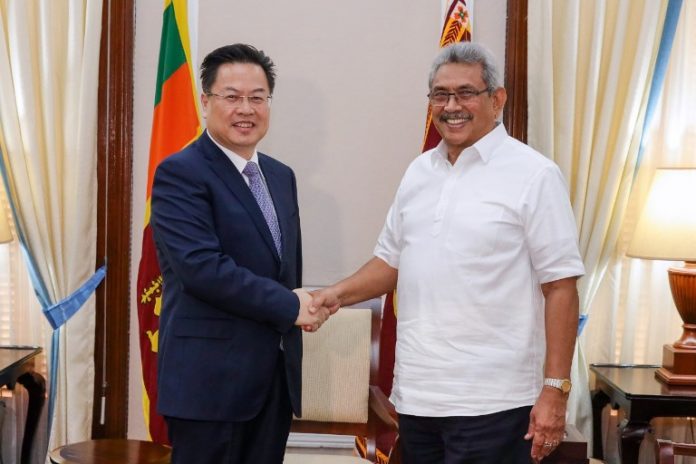 President Gotabaya Rajapaksa yesterday gifted a consignment of Ceylon Black Tea to Chinese Ambassador Cheng Xueyuan to be sent to those affected by the Coronavirus in his country.

“He, on behalf of President Xi Jingping and the Chinese Government, thanked Sri Lankan Government and the people for the kindness shown to China in this difficult moment,” it said.

He also thanked all the religious and other leaders who organized the all night Pirith sermon on February 5. The PMD said every divisional secretariat throughout the country conducted the Pirith ceremony at the same time, blessing those who are affected for a speedy recovery.

President Rajapaksa in turn thanked the Ambassador for the assistance extended to bring back the Sri Lankan students from Wuhan province.

“As they are students, their parents were worried,” explained the President. “So, they really appreciated that they were allowed to leave Wuhan. We hope that this epidemic will soon be brought under control.”

Upon the President’s inquiry as to the current status of the disease, the Ambassador Xueyuan explained in detail that the virus was detected soon after the Chinese New Year.

“Wuhan is a vast province. During the Chinese New Year, a lot of people moved in and out of the province. However, as soon as it came to the Chinese Government’s notice of this new virus and its seriousness, strict measures were taken to contain and to stop the disease from spreading,” the Chinese envoy said.

“However, as this virus takes about 7 to 14 days to show its symptoms, the records will now show an increase in number of cases before it starts decreasing,” he also said.