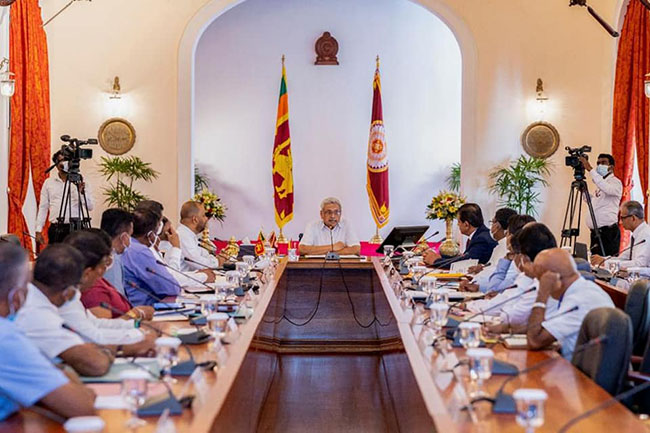 Negotiations with several countries to meet the fertilizer requirement have been successful, he said. Therefore, the President requested all farmers not to give up cultivation during the Yala Season due to a shortage of fertilizer or any other reason.

The President made these remarks at a discussion held at the President’s House in Colombo, on Monday (30) on the cultivation activities of the Yala Season and the lessening of possible food shortages in the future.

The President pointed out that a National Fertilizer Policy should be formulated expeditiously for the importation, distribution, proper management, awareness, and coordination among farmers and officials.

The President also said that the full involvement of the Ministry of Agriculture should be given to carry out cultivation activities using chemical or organic fertilizers as per the wishes of the farmers.

By identifying paddy fields that are not used for cultivation during the Yala Season and encouraging the cultivation of essential crops including green gram, cowpea and soybean, farmers can be given the opportunity to earn a higher income.

The President instructed to expedite the release of Kandakadu farm belonging to the National Livestock Development Board for the cultivation of maize, soybean, and other crops.

The government owns a large percentage of uncultivated land. It was decided to identify these lands and hand them over to young farmers, the President’s Media Division reported.

Cultivating crops at home gardens and lands where government offices are located should be encouraged. Minister Mahinda Amaraweera said that all public servants from Ministers, Members of Parliament and other political leaders should contribute to this and set a precedent.

It was also decided to commence a Cultivation Promotion Week integration all provinces by identifying the crops to be cultivated and to provide funds allocated to the Provincial Councils for agriculture, livestock and fresh-water fishing industries without any limit.

The President instructed the government to make optimal use of the Eppawala phosphate deposit to produce fertilizer containing phosphorus needed for the upcoming Maha Season.

Measures to provide animal feed in order to control the prices of milk, eggs and chicken were also discussed at length.

Plans have been made to reduce post-harvest wastage, save food, store food, preserve and increase the value of agro products, introduce and popularize alternative foods.

Secretary to the Ministry of Agriculture M.B.R. Pushpakumara said steps have been taken to implement a number of programmes including promoting agricultural products related self-employment and to introduce methods to prevent diseases and damages caused by pesticides in crops.

Chief of Staff to the President Anura Dissanayake and heads of line agencies of the Ministry of Agriculture were also present.