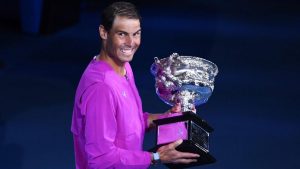 Rafael Nadal created history on Sunday (January 30) when he won his second Australian Open title after victory over Russia’s Daniil Medvedev in the summit clash at the Rod Laver arena.

It was a hard-fought win for Nadal, who was thinking a few months earlier whether he would be able to make it to Australia or not as he battled his body and its injuries. Stuck at 20 career Grand Slam titles with Roger Federer and Novak Djokovic, Nadal finally managed to make the first move and reach the 21 mark.

He will look to extend it to 22 when he plays French Open, which he has won a record number of time (13).

Rafa Nadal edged Daniil Medvedev in a classic Australian Open final on Sunday, roaring back from two sets down to claim a record 21st Grand Slam title only months after fearing his glorious career might be over due to injury.

With Novak Djokovic forced out by deportation and Roger Federer recovering from knee surgery, the Spanish great is now one major title clear of his ‘Big Three’ rivals after surviving the 2-6 6-7(5) 6-4 6-4 7-5 thriller at Rod Laver Arena.