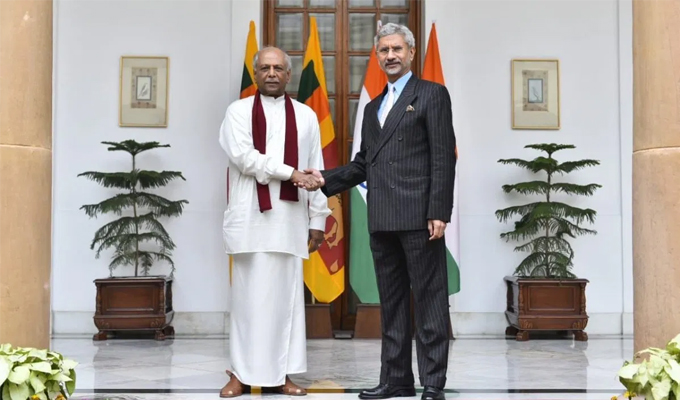 The Sri Lankan foreign minister, who arrived in India on Wednesday night (08) on a three-day visit, during the talks stated that as announced by President Gotabaya Rajapaksa all the 52 boats being held by Lanka will be released, Indian Ministry of External Affairs Spokesperson Raveesh Kumar said.

We understand from the conversation that the process to release the boats is ongoing and should happen very soon,” Kumar said.

He said the Indian side is also engaged with the Sri Lankan government for the speedy release of 15 Indian fishermen who are still in their custody.

“Productive discussions with FM @DCRGunawardena of Sri Lanka on a range of substantive bilateral issues and regional concerns. Elaborated on the vision of our leaders for further strengthening India-SriLanka relations,” Jaishankar said in a tweet.

The Sri Lankan foreign minister reiterated the importance laid by President Rajapaksa on exploring newer areas of cooperation with India with emphasis on skill development, vocational training and capacity building and requested India’s support, the MEA said in a statement.

Indian External Affairs Minister Jaishankar assured full support to such initiatives on the basis of the recognised strength of India’s institutions in these areas and based on Sri Lanka’s requirements, it said.

The two ministers also exchanged views on regional and global issues of mutual interest, including climate change and counter terrorism, the statement said.

The discussions between Jaishankar and his Lankan counterpart Gunawardena revolved around the bilateral economic projects and there are quite a few on the table on India’s development assistance, on human resource development, cooperation between India and Sri Lanka, Kumar said.

“At the same time, the EAM did take up the matter of fishermen and boats which are in the custody of Sri Lanka,” he said.

This was the Sri Lankan foreign minister’s first foreign visit since he assumed this position.