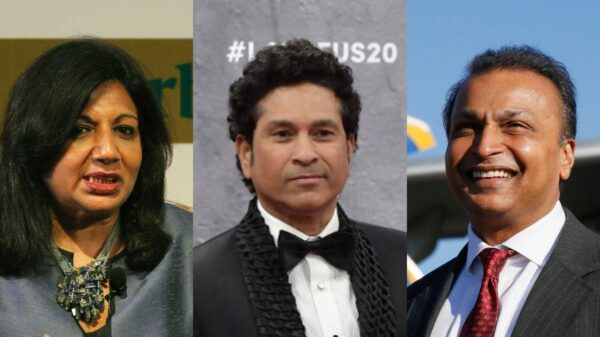 Indian cricketer and a Member of Parliament, Sachin Tendulkar, Reliance ADAG chief Anil Ambani and Kiran Mazumdar Shaw, chairperson and MD of Biocon were listed among the affluent individuals whose names were linked with the Pandora Papers, an investigation uncovering financial secrets held by high-profile individuals around the world. Earlier on Sunday, the International Consortium of Investigative Journalists (ICIJ) had unveiled ‘Pandora Papers’, the biggest ever leak of offshore data that claimed to have uncovered financial secrets of rich and powerful of 35 current and former world leaders, more than 330 politicians and public officials in 91 countries and territories, and a global line up of fugitives, con artists and murderers.

“People linked by the secret documents to offshore assets include India’s cricket superstar Sachin Tendulkar, pop music diva Shakira, supermodel Claudia Schiffer and an Italian mobster known as Lell the Fat One. Tendulkar’s attorney said the cricket player’s investment is legitimate and has been declared to tax authorities,” the ICIJ which involved the BBC, The Guardian’ newspaper in the UK and The Indian Express’ in India among 150 media outlets said in its report.

As per an investigation of records of Alcogal, Panama law firm which is part of Pandora Papers,  Sachin, with his wife Anjali Tendulkar and father-in-law Anand Mehta, were named as Beneficial Owners (BOs) and Directors of a British Virgin Islands (BVI)-based company: Saas International Limited. The company was liquidated in July 2016, said Indian Express in its report.

As part of the infamous “Pandora Papers” investigation, the ICIJ has revealed nearly 12 million documents purportedly exposing hundreds of world leaders, powerful politicians, billionaires, celebrities, religious leaders and drug dealers who have been hiding their investments in mansions, exclusive beachfront property, yachts and other assets for the past quarter-century.