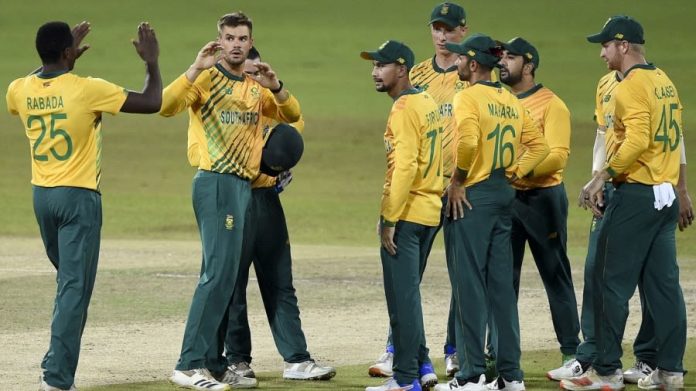 As South Africa  won the 2nd T20 match against Sri Lanka by 9 wickets yesterday (12) at R.Premadasa Stadium The South African team won the Twenty20 series , 2-0 with one match to spare.

Quinton de Kock hit an unbeaten 58 as South Africa clinched the T20I series against Sri Lanka with a nine-wicket thumping on Sunday. The Proteas, who won Friday’s opener in the series by 28 runs, were hardly tested by their flat opponents, who managed just 103 in 18.1 overs. That was their lowest first-innings total at home in this short format.

South Africa wasted little time chasing that figure down, De Kock helping them open up a 2-0 series lead inside 15 overs.

Markram finished with a career-best three for 21, which included the wicket of opener Kusal Perera for 30.

Bhanuka Rajapaksa was Sri Lanka’s next highest scorer with 20 as the hosts lost seven for a paltry 32 runs between the 10th and 19th overs.

Sri Lanka failed to get rid of De Kock with a review following the fourth delivery of South Africa’s innings and the 28-year-old did not look back.

He brought up his 10th T20I fifty, and fourth of the year, after his opening stand with Reeza Hendricks was broken in the ninth over when Hendricks was caught by Dinesh Chandimal off the bowling of Wanindu Hasaranga.

Markram added an unbeaten 21 as South Africa reached their target with almost seven overs to spare.

De Kock was rested for the ODI series, which Sri Lanka won 2-1, and he showed his worth here. He steered his side to victory with an unbeaten 58 off 48 deliveries and will be a key figure if South Africa are to challenge for the T20 World Cup, which begins next month.

Kusal janith Perera got Sri Lanka off to a solid start with 30 from 25 balls, but his team-mates failed miserably to capitalise. The 31-year-old, making his comeback after recovering from COVID-19, hit a third of his side’s runs, with only three others reaching double figures.