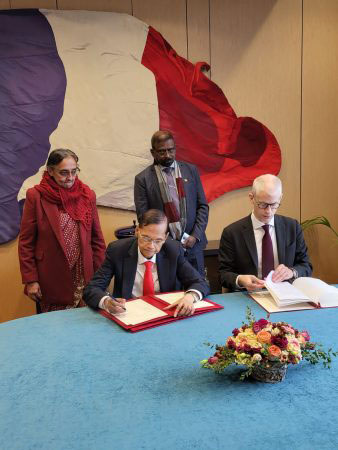 Foreign Minister Prof. G.L. Peiris has met with France’s Minister Delegate for Trade and Economic Attractiveness Franck Riester at the Foreign Ministry in Paris to discuss French support for the expansion of economic relations with Sri Lanka in a variety of sectors.

A Memorandum of Understanding was signed between the two Ministers at the conclusion of their discussion, the Foreign Ministry said.

The main focus of discussion was networking arrangements between French and Sri Lankan companies and French expertise for educational programmes in entrepreneurship, business management and related subjects, the statement said.