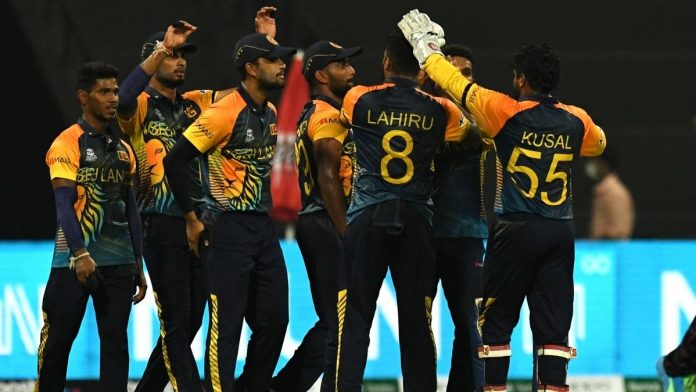 Sri Lanka defeated Ireland by 70 runs at the Sheikh Zayed Stadium in Abu Dhabi on Wednesday to qualify for the Super 12 stage of the 2021 T20 World Cup. Batting first, Sri Lanka got off to a poor start, losing three early wickets.

However, the islanders fought back through Pathum Nissanka and Wanindu Hasaranga, both of whom scored half-centuries to help Sri Lanka post of total of 171/7 from their 20 overs. In response, Ireland never got going and kept losing wickets at regular intervals before folding their innings at 101. The win took Sri Lanka to four points from two games and assured them of a spot in the Super 12 phase

Sri Lanka slipped to 8-3 inside the first 10 deliveries before Hasaranga and opener Pathum Nissanka (61) wiped out Ireland’s hopes and carried the former champion to a daunting 171-7.

Ireland was bowled out for 101 all out with nine balls to spare despite Sri Lanka dropping a couple of easy catches. Only captain Andy Balbirnie (41) and Curtis Campher (24) reached double figures as Ireland crumbled against Sri Lankan pace and spin.

Hasaranga, promoted in the batting order at No. 5, smashed 10 fours and a six and raised a 123-run stand as Sri Lanka recovered from a top-order collapse as it did against Namibia in the first game.

Fast bowler Josh Little (4-23) had clean bowled Dinesh Chandimal (6) and Avishka Fernando in the second over after Kusal Perera was caught low in the covers by Gareth Delany in Paul Stirling’s first over.

Hasaranga was finally caught at point off Mark Adair’s (2-35) slower delivery in the 16th over before Little grabbed two more wickets that included the wicket of Nissanka, who was caught behind.

The winner of Ireland vs. Namibia on Friday will join Sri Lanka in advancing to the Super 12 stage.

Wiese struck five sixes and four boundaries as Namibia reached 166-4 with an over to spare.

The Netherlands had earlier scored 164-4 with opening batsman Max O’Dowd getting 70 off 56 balls. Scott Edwards added 21 off 11 balls.