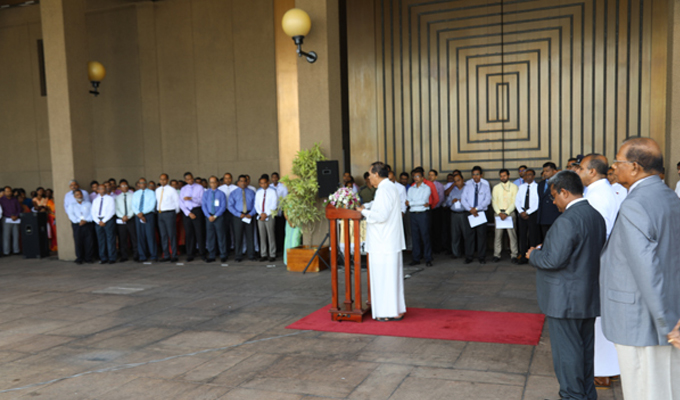 The speaker of Parliament Karu Jayasuriya stated that the parliament of Sri Lanka has been regarded high amongst 170 parliaments of the world and that it has become one of the exemplary parliaments.

The speaker further stated “There is a new president appointed now. The new government is in action. A general election will be held in due time. In such an instance, the appointment of a new speaker is possible. I believe that the incoming speaker will continue to maintain this momentum. “

Furthermore, the speaker highlighted that it was his wish to establish a brotherhood working as one family within the parliament when he took over as the speaker in September 2015 and as he looks back at his term served, he can be happy.  He made these remarks while attending the New Year ceremony held at Parliament where the staff took oaths of Public Service undertaking their duties for the year ahead.

The New Year ceremony held at Parliament commenced with the hoisting of the National flag by the speaker followed by the singing of the national anthem. A two-minute silence was observed to commemorate those who sacrificed their lives for the country including war heroes.

The public service oath was read out loud to ensure commitment to the implementation of government policies and objectives. The speaker expressing his views stated that;

“It has been 71 years since the country was liberated. Youth unrest, terrorism, political issues, and prevailing ethnic and religious differences resulted as a drawback in progressing forth as a nation. We must build unity and good relations among all ethnicities. It is very vital for the future of the nation. Prosperity to the country can only be brought by eliminating the racial and religious differences in the country.”

In addressing the gathering, Secretary General Dhammika Dasanayake stated that all parties should work together to achieve national goals. Adding to the aforesaid, the Secretary-General stated that the work conducted by the Parliament is of great significance for the betterment of the country thus the staff should be more committed to their duties. Adding to it the Secretary-General stated that the establishment of a communication department and the project to conserve library documentation were significant measures among many others pointing out that the Parliament has been successful in bringing about positive changes during the past year. Furthermore, he stressed that this year would be a challenging year and that all staff must face up to it collectively.

Following the ceremony, a tree-planting program was held in the Parliament premises.