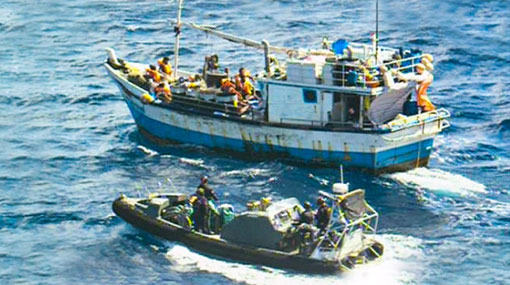 Speaking to reporters in Brisbane, Mr Dutton said he believed the boat was a “test” to see whether Australia’s policy on boats had changed since the election earlier this month.

“It’s clear to me that the people smugglers anticipated a Shorten-Labor government and no doubt they’ll be disappointed by the fact that didn’t happen,” he told reporters on Thursday.

Earlier on Thursday, new Labor leader Anthony Albanese hit back at claims that Labor was responsible for the most recent people smuggling operation, pointing out the government has been in charge of borders for the past six years.

“There have been 10 boats come from Sri Lanka on this government’s watch, 10, not one,” he said.

“I think it is the respectful thing for me to do to have a discussion with the Prime Minister this afternoon.”

He also urged the Labor leader to abandon his support for the controversial Medevac law, which streamlined the process for offshore refugees and asylum seekers to get urgent medical care.

“That [the Medevac law] is a pull factor for people on boats as well,” he said.

“People smugglers have the Labor party worked out.”

Earlier on Thursday, an Australian Border Force spokesperson confirmed the vessel, which was carrying at least one baby among the 20 asylum seekers, was spotted last week in the Indian Ocean, heading towards Australia’s north-west coast.

During the media conference, Mr Dutton also confirmed that the boat did not reach Christmas Island – the location of a recently reopened offshore detention centre – and that none of the asylum seekers were detained at the centre, as was earlier reported.

It was earlier reported the vessel reached the island and the group were briefly detained there.