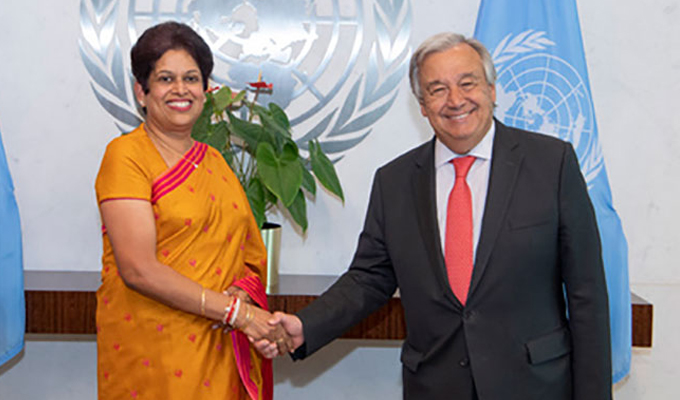 The new Permanent Representative of Sri Lanka to the United Nations, Kshenuka Senewiratne, presented her credentials to UN Secretary-General António Guterres on Wednesday.

Until her latest appointment, Ms. Senewiratne served most recently as Ambassador to Thailand beginning in 2015, and was also accredited to Cambodia and the Lao People’s Democratic Republic.

Ms. Senewiratne’s foreign assignments included Permanent Representative to the United Nations in Geneva from 2009 to 2011. That followed a posting as Director General for Europe, Commonwealth of Independent States and the Americas at the Foreign Ministry, from 2008 to 2009.

She was High Commissioner to the United Kingdom from 2005 to 2008, having previously served as Additional Director General for Economic Affairs at the Foreign Ministry from 2004 to 2005.

With more than 30 years in her country’s foreign service, Ms. Senewiratne also served a stint as Deputy High Commissioner to the United Kingdom from 2002 to 2004, prior to which she was Director and Acting Director General for Economic Affairs in Ministry of Foreign Affairs from 1997 until 2002.

Ms. Senewiratne’s earlier foreign postings included a stint as Third Secretary at Sri Lanka’s Permanent Mission in New York from 1988 to 1990, before which she served as Assistant Director in the Foreign Minister’s Bureau from 1985 to 1988 and then as Coordinating Secretary from 1984 to 1985.