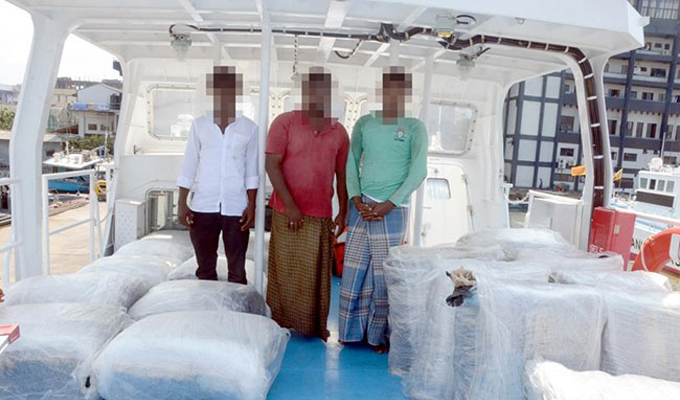 Three Indian nationals have been apprehended with a large consignment of Beedi leaves during a joint operation conducted by the Sri Lanka Navy and Coast Guard in the seas northwest of the island.

Having spotted a suspicious fishing dhow in the seas off Kudiramalai, Kalpitiya by the Navy, a Sri Lanka Coast Guard Ship patrolling in north-western seas had been directed to intercept the suspicious dhow.

After approaching the suspected vessel, it was identified as an Indian dhow trespassing on Sri Lankan territorial waters. During further search, approximately 1,000kg of beedi leaves in 33 packages had been recovered and 3 Indian fishers aboard were subsequently taken into custody.

The suspects are at the age of 26. It is believed that the suspects have attempted to smuggle the consignment to the country by boat to hand over it to smugglers operating in the country.

The suspects along with the stock of beedi leaves will be handed over to the Colombo Customs for onward investigation.

Meanwhile, the Indian fishing dhow was escorted to the naval base SLNS ‘Vijaya’ for further investigation.

This year alone, the Navy has recovered nearly 50 tons of beedi leaves from operations carried out at sea and on the shore.