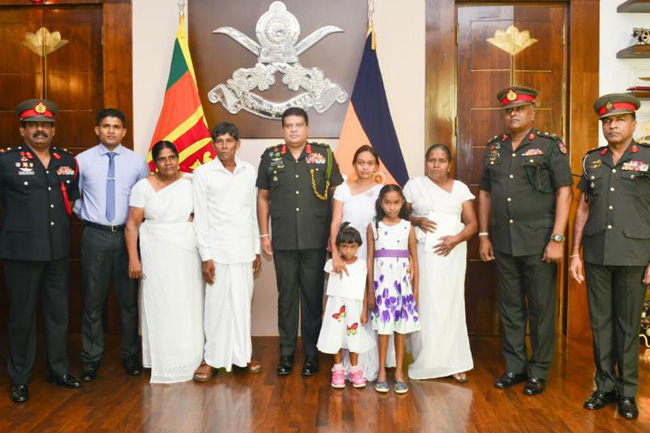 Commander of the Army Lieutenant General Shavendra Silva has handed over the UN-granted compensations for the families of the two Army heroes, who lost their lives whilst on active duty in the UN Peacekeeping Mission in Mali.

Bereaved family members of the two fallen Army soldiers were invited to the Army Headquarters yesterday (05).

Late Major H.W.D. Jayawickrama and Sergeant S.S. Wijekumara were killed in an IED attack during the United Nations Multidimensional Integrated Stabilization Mission in Mali (MINUSMA) under the United Nations Peace Keeping Operations in Mali on the 25th of January.

Following the negotiations that continued between the Army’s Directorate of Overseas Operations in the past few months, the UN decided to offer compensation, which were to be disbursed among dependent family members, including children, spouses and parents of both families, the Army said in a release.

However, on a fore-sighted suggestion, made by the Commander of the Army, those compensatory allocations made for late Sergeant’s two daughters, who are still at the schooling age, were separately saved in two Fixed Deposits in the National Savings Bank with the family’s concurrence until both of them reach the age of 18 years, the release said further.