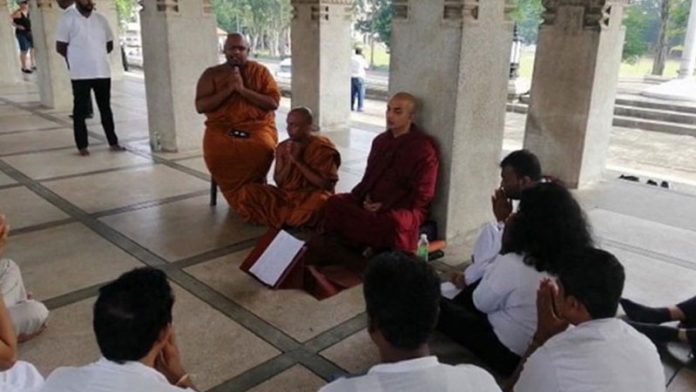 Ven. Ududumbara Kashyapa Thera has called off his protest fast after receiving letters from the two presidential front-runners Gotabaya Rajapaksa and Sajith Premadasa as well as PM Ranil Wickremesinghe assuring that the Millennium Challenge Corporation (MCC) Agreement will not be signed before the Presidential Election.

Kashyapa Thera commenced a protest fast last morning (05), calling for the government not to ink the MCC Agreement with the United States.

The letter from PM Wickremesinghe mentioned that the MCC Agreement will not be signed hurriedly before the Presidential Election. It further stated that the Agreement will only be signed after obtaining the views of all relevant parties and debating it in the Parliament.

Ven. Kashyapa Thera stated that he also received letters from the presidential candidates Gotabaya Rajapaksa and Sajith Premadasa assuring that such agreements will not be inked after November 16th.

Rajapaksa had requested Kashyapa Thera to end his protest fast stating that he would make sure to revoke the agreements that are already signed by the government with foreign countries, from the day Presidential Election was announced until its results are released, if they are contrary to national interests.

He also took a dim view of the Twitter post of Minister Mangala Samaraweera, which alleged that the protest fast was a stratagem of Gotabaya Rajapaksa.

Minister Samaraweera, taking to his official Twitter account yesterday (04), stated “Parliamentary approval is a standard practise and requirement for all MCC grants. Parliamentary ownership is critical for the programmes success and sustainability. No need for GR’s rent-a-fast to stock up on lemon puffs.”