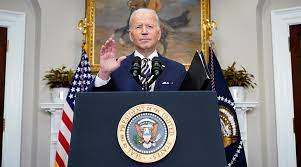 With Russia intensifying its war on Ukraine, killing civilians and triggering a mass refugee crisis, President Joe Biden on Tuesday announced a US ban on imported Russian oil. Critics of Russia have said that sanctioning its energy exports would be the best — perhaps only — way to force Moscow to pull back.

A full embargo would be most effective if it included European allies, which are also desperate to stop the violence in Ukraine and the danger Moscow poses to the continent. Yet it’s far from clear that all of Europe would take part in an embargo, though Britain announced Tuesday that it would phase out Russian oil imports by year’s end.

Unlike the United States, Europe is deeply reliant on energy it imports from Russia, the world’s second-largest crude oil exporter behind Saudi Arabia. While the US could replace the relatively small amount of fuel it receives from Moscow, Europe could not, at least not anytime soon.

What’s more, any curbs on Russian oil exports could send already skyrocketing oil and gasoline prices ever higher on both continents and further squeeze consumers, businesses, financial markets and the global economy.