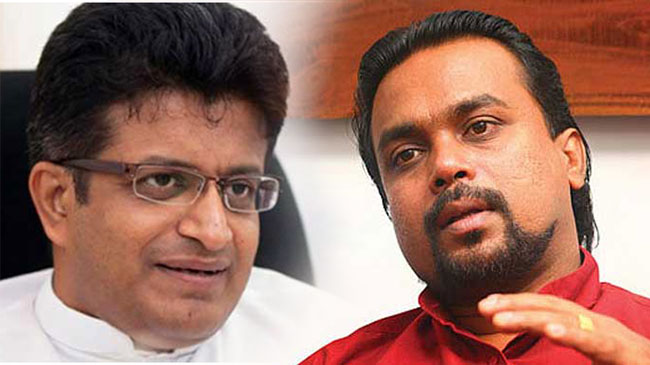 Ministers Wimal Weerawansa and Udaya Gammanpila have been removed from their respective ministerial portfolios by President Gotabaya Rajapaksa.

The President’s Media Division said that under the powers vested in him by the Constitution, the President has removed the two MPs from their Cabinet minister posts with effect from this evening (03).

This was followed by the reshuffling of several ministerial positions.

Secretary to the President Gamni Senarath was also present on this occasion.

Meanwhile SLPP Member of Parliament S.B. Dissanayake has been sworn in as the new Minister of Industries, the position held by MP Wimal Weerawansa.

PHU leader Udaya Gammanpila has served as the Minister of Energy while NFF leader Wimal Weerawansa served as Minister of Industries.

It was reported earlier today that the President has decided to reshuffle several key Cabinet positions.

Minister Gamini Lokuge had confirmed that he was sworn in as the new Minister of Energy, the position previously held by MP Udaya Gammanpila.

The minister revealed this while speaking to reporters outside the Presidential Secretariat in Colombo his evening, following the sudden Cabinet reshuffle.

Minister Lokuge also said that Pavithra Wanniarachchi, who was serving as the Transport Minister, was sworn in as the new Minister of Power, the post previously held by him.