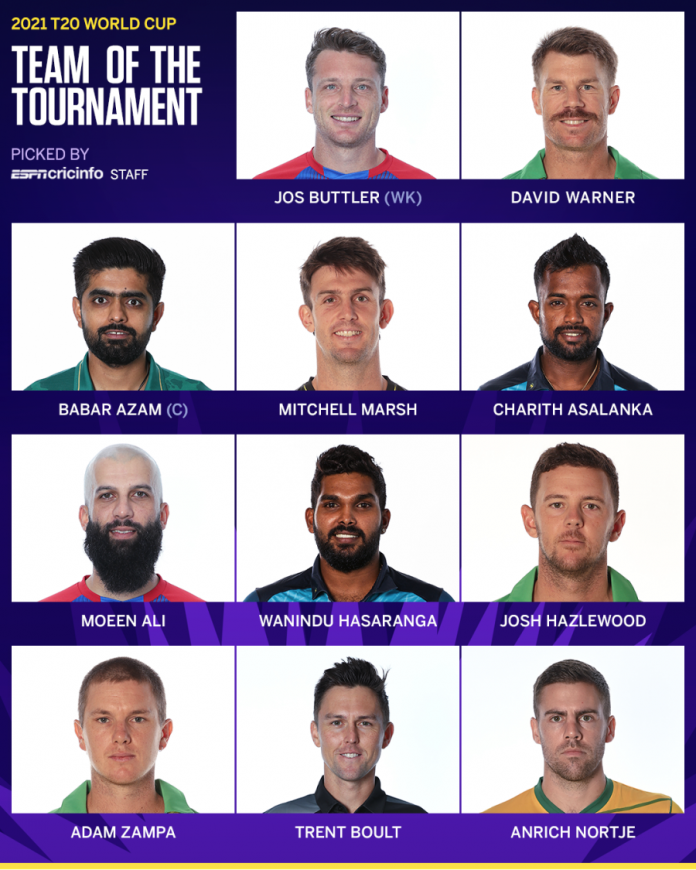 After 45 matches and countless incredible performances, the Upstox Most Valuabe Team of the Tournament has been selected.

The selection panel with the unenviable task of narrowing it down to just 11 players on the team sheet and a 12th in reserve were commentators Ian Bishop, Natalie Germanos and Shane Watson, and journalists Lawrence Booth and journalists Shahid Hashmi.

Before we look at the XI, a word from Ian Bishop on the selection process:

“As with any team selection there will be varying opinions, and robust discussion on the final composition of the squad,” Bishop said. “The panel respects that, and we encourage the strong debate that will ensue.

“This team was incredibly difficult to select over such a highly competitive tournament. Selections were based predominantly on the Super 12 onward to the final.

“As a panel we felt that the combination of runs plus strike rate plus match impact for batsmen, to be decisive factors. We endeavoured to select players as close to their initial team position where possible. This intention was not always a reality, as some compromises had to be made.

“The top three in the order were so outstanding that we could not leave any of them out. Notable absentees include Mohammed Rizwan who was simply outstanding and courageous in his performance. However, we could not fit him into the team too far outside of the opening position where he is most suited and successful, nor ahead of those selected.

“The panel also saw the impressive young talent of Charith Asalanka and Aiden Markram as a real bonus for the team and their countries in this tournament.

“Moeen Ali was selected as that utility all-rounder who could be applied with the bat to various match situations and innings requirements. He also offered a more than substantial bowling option.

“The bowling group was felt to select itself. Three seamers who excelled and two outstanding leg spinners in Hasaranga and Zampa. The panel was impressed with Shaheen Shah Afridi’s bowling at 21 years of age and we felt compelled to institute him as the optional player in the 12-player squad.

“As for the player of the tournament; any of Babar Azam, Jos Butler and Adam Zampa would make a compelling case. In the end, David Warner’s impact over the tournament and into the knockout stage just swayed the panel in his favour. Once again we thank cricket lovers the world over for their insight and debate and accept that there are various methods and criteria to selecting any one team or player. Thanks to the cricketing public for your continued following and love of this great game.”