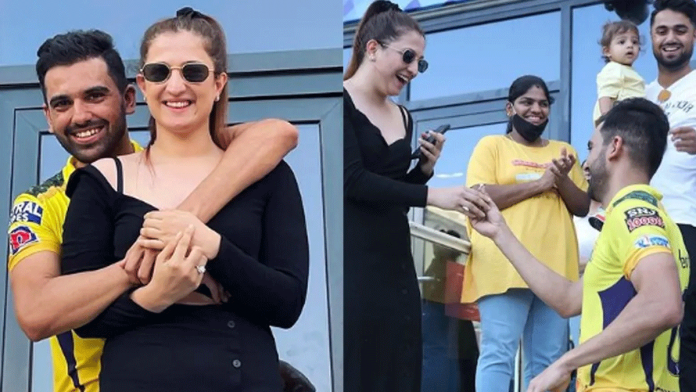 Despite a defeat to Punjab Kings (PBKS), Chennai Super Kings (CSK) player Deepak Chahar ended the day on an extremely happy note as he proposed to his girlfriend after the game and she said yes. After CSK’s defeat in Match 53 of the ongoing Indian Premier League (IPL) 2021 season, Chahar went to the stands and took his girlfriend by surprise, who was dressed in black. The duo were congratulated by the people seated near them, including MS Dhoni’s wife Sakshi. Chahar posted a video of the proposal on Instagram and captioned it as, “Special moment”.

Until the proposal, Chahar was rather having a highly uneventful day as CSK fell to a six-wicket defeat vs Punjab. Although the defeat didn’t really matter for Chennai as they have already qualified for the playoffs, the India international would be looking to make a comeback in the knockout stages.

The 29-year-old could only take a wicket and conceded 48 runs in four overs, as Punjab raced to 139 for four in 13 overs, crossing the 134-target set by CSK with seven overs to spare.