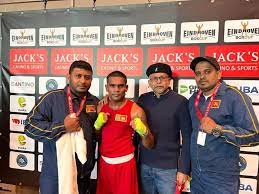 Mauritius’ All Africa Games winner Richarno Colin was faster than Germany’s Assan Hansen in the final of the light welterweight (63.5kg) and claimed his next international success. His teammate, the two-time Olympian Merven Clair outpointed Canada’s Hunter Lee and his technical skills were enough to get Mauritius’ second gold medal in Eindhoven.

Twenty-three final contests took place in the Eindhoven Box Cup in the Netherlands which was the next international competition after the EUBC European Men’s Elite Boxing Championships. France’s 21-year-old Ibrahim Boukedim won the most exciting contest in the day of the finals when Belgium’s newcomer Michiel Partoens stopped his Irish opponent at the heavyweight (92kg).