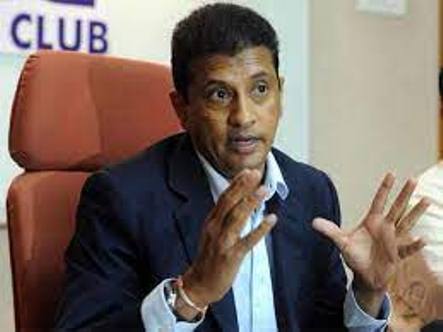 Speaking to NDTV, former cricketer Roshan Mahanama said the leaders are to be blamed for Sri Lanka’s current economic crisis, and that there is a need for a change.

Blaming the leaders for creating the economic crisis that Sri Lanka currently finds itself in, former cricketer Roshan Mahanama said that the country is running out of time. Mahanama, who was part of Sri Lanka’s 1996 World Cup-winning team, said that the middle-class of the country has been slowly wiped out and people will continue to protest unless and until the leaders come up with a solution to address the dire situation. The former cricketer was also critical of the current regime and said that there is a need for a change.

“They (Sri Lankan people) have been there during the good and bad times for me when I was a player and I think I have a responsibility to come out and speak up on behalf of them. Yes, we are going through a crisis. This is a very unusual crisis. I was told that India also had a similar problem in 1991, if I’m not mistaken. This is a crisis that in my point of view has been created by the leaders of the country,” Mahanama said in an interview with NDTV.

“I feel that the middle-class in the country has been slowly getting wiped out. That’s why everyone is getting onto the streets. At the end of the day, when you don’t have petrol, electricity, milk powder, essentials — this is up to the leaders to make sure that they keep their citizens comfortable.

“I feel that we need to have a change in the regime. All these parties need to get together to come up with a solution. They need to discuss solutions. They do have a responsibility that we come out of this situation,” he added. “We are running out of time. They (the leaders) are the people who are responsible in taking these decisions. People will keep protesting until they see that some important decisions are taken. And it’s important that we show our disappointment until they start coming up with solutions.”

Another former Sri Lankan cricketer Sanath Jayasuriya had lauded the Indian government and PM Narendra Modi for sending help to the island nation. “As a neighbour and a big brother of our country, India has always helped us. We’re grateful to the Indian government and PM Modi. For us, it is not easy to survive because of the current scenario. We hope to come out from this with the help of India & other countries,” Jayasuriya had said.

Mahanama, who went on to become an ICC Match Referee, too spoke of India’s support. “India has always been supportive, always been there during good and bad times.”

Shortages of food and fuel, along with record inflation and regular blackouts, have inflicted unprecedented misery on Sri Lankans in the most painful downturn since independence from Britain in 1948.

Mahanama spoke about the impact the current economic crisis has had on the people of Sri Lanka and himself. “I have been doing that (taking to the streets to support people). It (economic crisis) has really impacted the people. Some of them are skipping meals, some of them can’t put food on the table — these are people who come from a fairly decent background. I’m not differentiating people here.

“I have done that as well (standing in queues). Unfortunately, people haven’t seen me because it’s my wife who’s been doing that for me because I feel that if I go there, people will come and help. I don’t think it’s fair. We need to be in that line. We need to be a part of everyone who is going through this struggle and show our support to everyone,” said the former cricketer.