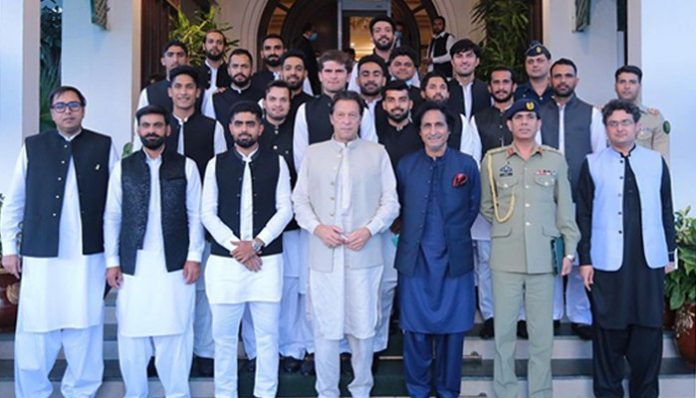 In a meeting with the T20 World Cup Squad, Prime Minister Imran Khan advised the team to perform well in the upcoming international cricket event.

The national squad for the T20 World Cup Wednesday (Sep. 22) arrived at the Prime Minister House to meet PM Imran Khan, who is also the patron-in-chief of the Pakistan Cricket Board (PCB).

The meeting was held in the backdrop of the recent big blow suffered by the PCB after New Zealand and England abruptly called off their Pakistan tours.

“A person can change its fate with his efforts and hard work,” the prime minister said as he met the squad, with Pakistan Cricket Board (PCB) Chairman Ramiz Raja, Senator Faisal Javed, and Special Assistant to the Prime Minister on Political Communication, Shahbaz Gill, in attendance.

“There are two ways, one of which leads to money while the other leads to respect […] and you have to break the idol of money,” said the premier while advising the team to play for the team and nation.

He said that the entire nation has its eyes on the team for the T20 World Cup.

Encouraging the team to play well, the premier said that Pakistan doesn’t lack talent and the entire world agrees with it. “When you enter the ground, enter with self-confidence and the determination to win.”

He said that the team which plays to avoid defeat never wins.

Recalling his days in the Pakistani cricket team, PM Imran Khan said that the team fought against unfavourable conditions and won the 1992 World Cup.

“We introduced the attacking technique in cricket,” he said.

He advised the squad to mentally strengthen itself and learn to enjoy the game instead of succumbing to pressure. “Become a strong team and work on taking wickets.”

Meanwhile Pakistan PM Imran Khan asks  PCB Chairman Ramiz Raja to change Pakistan  squad for T20 Cricket World  Cup. He is to follow PM’s instructions and the changes will be made accordingly in the already announced Pakistan squad for next month’s mega event.