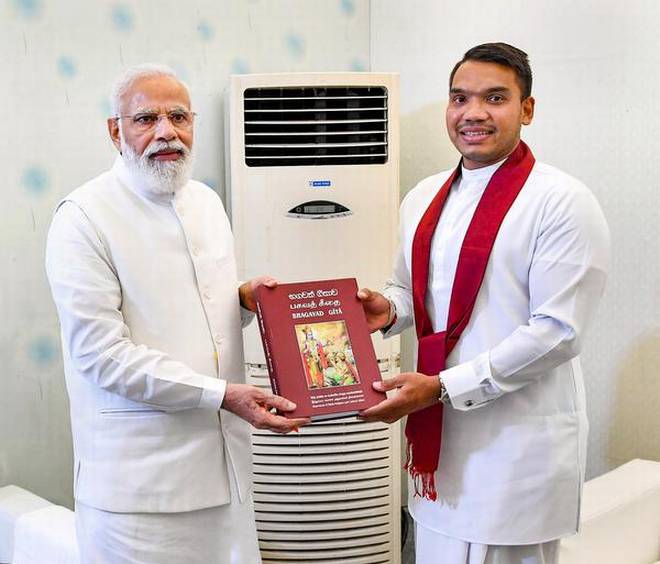 Sri Lanka’s Sport Minister, Namal Rajapaksa, who is the son of Mr. Mahinda Rajapaksa, handed over a copy of the publication to Mr. Modi on the sidelines of the Kushinagar airport inauguration in Uttar Pradesh.

“The translation of the sacred text was commissioned by HE @PresRajapaksa as symbol of our people to people friendship & our cultural similarities,” said a tweet from Mr. Namal Rajapaksa, who is in India to attend the event with ministerial colleagues and nearly 100 Buddhist monks from Sri Lanka. Mr. Mahinda Rajapaksa is also the Minister for Buddhasasana, Religious & Cultural Affairs.

“The greatest gift Sri Lanka received from India is Buddhism,” said the Minister from Sri Lanka’s powerful first family, adding that it was the vision President Gotabaya Rajapaksa and Mr. Modi to “strengthen this bond between our nations and people.”

The Sri Lankan delegation also took relics from the ‘Rajaguru Sri Subhuthi Maha Vihara’, a famed Buddhist shrine located 40 km south of Colombo. Buddhists consider the relics sacred. Indian officials would organise an exposition of the relics in several cities, including Kushinagar and Sarnath, a statement from the Indian High Commission in Colombo said. The Sri Lankan delegation would visit Varanasi and offer special prayers at the Kashi Vishwanath temple.

The heightening focus on religious and cultural ties by both governments comes amid high-level engagement between New Delhi and Colombo.

On Wednesday, Mr. Namal Rajapaksa met Foreign Secretary Harsh Vardhan Shringla and had a “cordial and productive conversation”, the Indian mission said in a tweet.

Mr. Shringla was in Sri Lanka earlier this month on a four-day visit, when he underscored the need to expedite India-backed development projects in the island nation, as well as enhance connectivity between the neighbours.

Last week, India’s Army Chief was in Sri Lanka to hold talks with the leadership on strengthening defence.