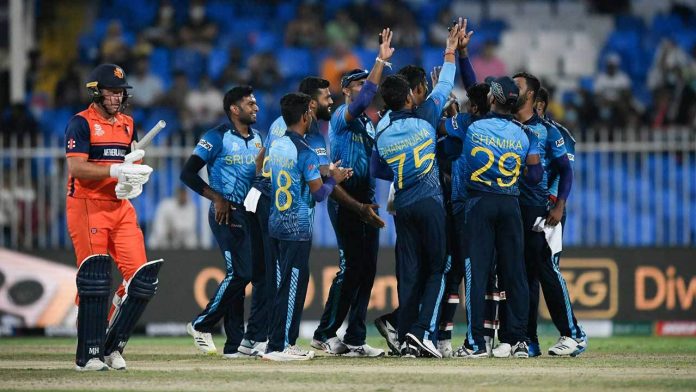 Sri Lanka beat the Netherlands by 8 wickets in the third & final match of the ICC T20 World Cup qualifiers in Sharjah yesterday. Accordingly, the undefeated Sri Lanka team qualified for the Super 12 round and the next match of the Sri Lanka team will be played on the 24th (Tomorrow start 3.30pm) against Bangladesh in Sharjah.

The inconsequential match ended inside two hours as the 2014 champions bowled out the Dutch for 44, the second lowest score in T20 World Cup history, before chasing down the target in just 7.1 overs to register their third successive win.

Lahiru Kumara and Wanindu Hasaranga starred with the ball for the Lankans with 3 wickets each while wicketkeeper Kusal Perera top-scored in their chase with 33 not out.

Sri Lanka had already qualified for the Super 12s after winning their first-two games and will join Australia, England, South Africa, West Indies and Bangladesh in Group 1 of the Super 12s.

Sri Lanka are almost certain to finish top of the table ahead of Namibia, who shocked Ireland in the first match of the day to book their Super 12 spot, barring a heavy defeat in this match.

The Netherlands, who lost out of the Super 12s race after they went down to Namibia for their second loss, play for pride in their final match of the tournament.