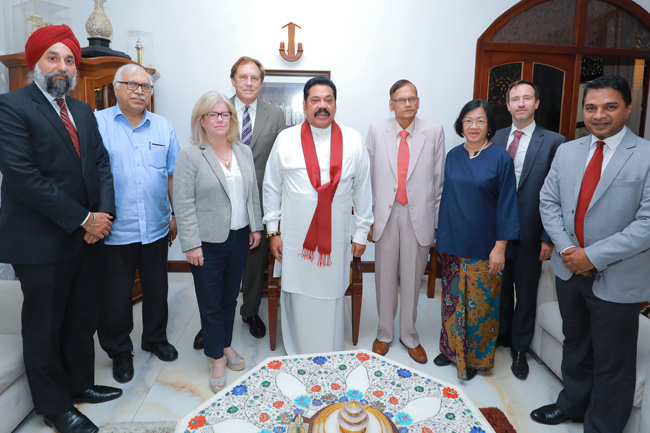 A high-level delegation of the NDI (National Democratic Institute) and IRI (International Republican Institute) led by Ambassador Karl Inderfurth met with the Leader of the Opposition Mahinda Rajapaksa this afternoon (01).

The official media unit of the Opposition Leader, issuing a release today, said the purpose of this visit was to look at the current political and electoral environment leading up to the presidential election in November.

Other than the candidates themselves, Ambassador Inderfurth stated that the delegation would be meeting with officials from all political parties, government officials, civil society and NGOs whilst in Sri Lanka.

Ambassador Inderfurth inquired into the possible concerns as the Opposition is leading up to the elections. According to the release, Mahinda Rajapaksa, speaking on the concerns that the Opposition faces, has mentioned “the recent exposure made by high-level government officials on the political pressure exerted on them by the government to unfairly and unjustly accuse and arrest members of the Opposition including the candidate Gotabaya Rajapaksa.”

He went on to state that though there’s no exception of violence leading up to the elections there is expectation of large scale manipulation of the system particularly by misusing state resources, the release read further.